It’s no secret that the music industries, well, all creative industries really, rely pretty heavily on stereotypes. You’e got the whirlwind tornadoes with a rock n roll lifestyle not ready to be tamed, the ones considered crazy or weird, the angelic group of soppy crushes, and then strangely as women reach an age; the childless.

I’ve noticed that it’s rarely noted if a male has a child or not. Yet for women artists in the mainstream, the gossip magazines question the sex life and even the fertility of a female, and are quick to assume a small bloat is the making of a baby bump.

Though I don’t personally agree with it myself, I have to say that there’s more of a prejudice against an absent mother than an absent father, and a childless woman than a childless man.

However, the woman faces many criticisms whichever path she may choose. For a pro female musician she is going to be tied down to produce music within a certain time, and leave home to record it and tour it. The road probably isn’t the ideal place for a child. For an amateur musician; the income isn’t steady, the job not reliable.

Yet there are musical mothers to be celebrated everywhere, for doing things their own way and for balancing the chaos that is life.

I’ll start with rapper M.I.A. The political activist performed at the 2009 Grammy Awards just hours before going into the early stages of labor with her son. Nine months pregnant, she performed “Swagga Like Us” with T.I and Jay-Z after being nominated for Record of the Year and winning Rap Performance.

Then there’s the irresistibly eccentric Bjork. A child star and Icelandic icon, the songstress made headlines for protecting her then ten year old son’s privacy when she battered a television reporter at Don Muang airport in Bangkok. Now, she talks fondly of her two children who she enjoys a social life with away from the cameras.

When I interviewed ESKA, we started by laughing about her two hour sleep a night. In 2015 she welcomed her newborn into the world, and had her debut album nominated for the prestigious Mercury Prize Award. “It’s a good problem to have, I’m not complaining. It’s the nature of the work and I’m so accepting of it – you have to be.” She told me, “I run on adrenaline. That and winging a prayer.” The musician also runs her own record label, Earthling Records, from home,

For Sonic Youth band mates Thurston Moore and Kim Gordon, their relationship was watched with eagle eyes during and after the height of the band. Ten years into their marriage, the two had their first and only child whilst in their 40’s and it didn’t stop them touring or performing. in her memoir, Girl In a Band, Gordon recalls her first music video shoot post-partum:

I was still feeling heavy with extra baby weight and managed somehow to fit into a giant red velvet prom dress. Traveling to California with a two-month-old baby was another “new mom” thing to have to worry about; dripping breast milk during a video shoot is not very rock! 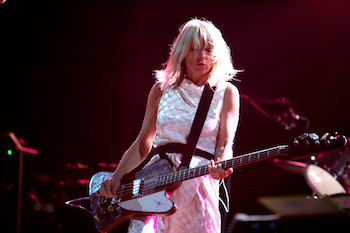 So this one is for all the women musicians out there, working with children in tow and bringing them up surrounded by creativity in the arts and the love of music.