My Little Pony: Not Only in it for the Ride 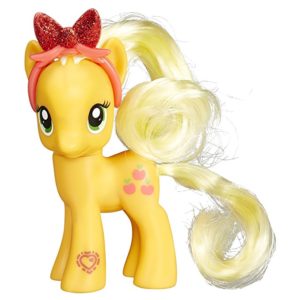 Applejack, the My Little Pony who likes to eat apples.

My Little Pony (MLP for short) was the toy that was drenched in the 80s. They were bright, brash and unashamedly consumerist. They had outrageous names to match and an animated TV series to showcase their wares.

MLP, however, did not start out so sugar-coated. They started off as a more conventional looking pony called My Pretty Pony standing at 10-inches tall. Soon enough, the ponies adopted names such as Butterscotch, Blue Belle, Minty, Snuzzle, Cotton Candy and Blossom. These were the six trail blazers for the rest of the MLP toys to come. They were also given matching ‘cutie marks’ that identified their personality traits. Ponies never seemed quite so appealing to the girls who dreamed of owning one.

The toy promoted friendship and caring and yet they were called My Little Pony. For girls competing in the 1980s toy stakes, MLP facilitated an early ownership of the toy. After all, MLP had another colourful animal creation in the form of the Care Bears to contend with.

Like so many toys of the era, MLP have become collectors’ items for the girls that grew up with them. Since then, the toy has attracted legions of male ‘bronies’ followers in the wake of the MLP Friendship is Magic TV series in 2010. But in the 1980s, girls were rest assured that MLP was the pony that was definitely on their side.