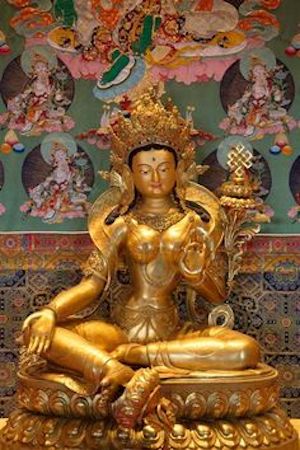 A golden statue of Tara.

Tara is a world-renowned deity, who predominantly features as a female Buddha in many strains of Buddhism, particularly Tibetan or the “Mahayana Tradition”, as it is also known. However, she is also included as one of the Mahavidyas, or the “10 Divine Mothers” in Hinduism and an independent deity in India. Tara embodies motherhood, compassion, and wisdom in all pantheons.

The Buddhist text Praises to the 21 Taras is one of the most important sources on Tara in Tibetan Buddhism. This hints towards her inception as the female counterpart of Avalokiteshvara, an early bodhisattva or “pre-Buddha”. He witnessed the suffering of mankind and shed a tear of compassion, which fell and formed a lake. Out of this lake came a lotus flower with Tara appearing when the petals opened. She heard the cries of those suffering in rebirth, which lead to her being a saviour deity.

In the Mahayana Tradition, Tara is also seen as a meditation deity used by Buddhists to develop their inner qualities and fully understand the teachings of compassion. She is considered the “Mother of all Buddhas” and the bringer of enlightenment and wisdom, echoing the Hindu and Indian traditions. As mentioned, there are 21 representations of Tara, with the Green Tara and the White Tara being the most popular. Green Tara is associated with protection and enlightenment, whereas White Tara is associated with life and compassion. There is occasionally a Blue Tara who is invoked to destroy enemies, and many others, including both black and golden.

Another strand of Buddhism tells of her origin as a young devout princess named Yeshe Dawa. Monks approached her, and suggested that she should pray to be reborn as a male to progress further. She responded to the monks, suggesting that only those who were weak-minded would see gender as a barrier to attaining enlightenment. Yeshe Dawa was concerned that this view obstructed women from obtaining a Buddha status. She resolved to be reborn as a female bodhisattva, before finally becoming a female Buddha. In her eternal state of meditation, she releases millions of beings from the suffering of rebirth.

The 14th Dalai Lama referenced Tara in a speech in 1989, referring to her as a form of feminist movement within Buddhism. Her emergence as a female bodhisattva in 6th century India was a way of making the religion more inclusive towards women.
Her original image features in the Ellora Caves in India and dates to the 7th century CE. This cave complex features over 2km of temples and monasteries which all date to between 600 and 1000 CE. Textual evidence of Tara is seen as early as the 5th century CE, and showcases her as an independent Indian deity. With the rise of both Hinduism and Buddhism in the area, she then became incorporated into both religions.