Mythological Girls: The Queen of Sheba 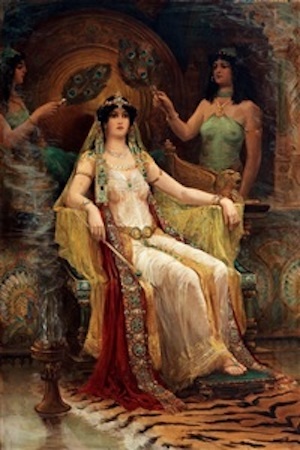 The Queen of Sheba appears in many holy texts, including the Jewish and Christian Bibles, the Islamic Qu’rān, and the Ethiopian Kebra Nagast. Despite having no ancient inscriptions dedicated to her, it may be that her myth is rooted in truth.

The Sabaean Kingdom existed between approximately 1200 BCE to 275 CE. It included many of the countries in the Horn of Africa, but predominantly Yemen and Ethiopia. The modern Yemenite capital of Marib was believed to be the capital of Saba. The kingdom was well-established during the Classical period, with ancient references to its status made by historians from Assyria, Greece, and Rome between the 8th century BCE and the 5th century CE. These Assyrian inscriptions regularly mention the ‘Arab Queens’ of the north. If these legends are correct, this would provide evidence of a trade relationship between the ancient Israelite kingdom of Samaria and the rest of the Arabian Peninsula.

The first mention of the Queen of Sheba is in a small passage in the Old Testament; a text used in both Christianity and Judaism. This account tells of her arriving to greet King Solomon at the head of a caravan of gold, gemstones, and spices. The account contains a description of how she posed a series of riddles to Solomon. When he answered them correctly, she converted from her pagan solar religion to Judaism. This journey is likely true, as South Arabian trade missions of spices to Mesopotamia were a common practice from as early as the 9th century BCE. This is also attested from accounts from ancient Persia. 1st century CE scholar Josephus from Roman Judea refers to the Queen of Saba being the ruler of both Egypt and Ethiopia, and being responsible for introducing balsam to Samaria.

Her mention in the Qu’rān is similar to that in the Old Testament. In this account Solomon is told of a wealthy kingdom called Saba, ruled by Queen Bilqīs. He commands that she comes to him as a subject, which she does when hearing he is an Islamic prophet. She locks away her opulent throne made of gold and semi-precious stones for safe keeping, but Solomon instructs a group of Jinn to move it to his palace to greet her on arrival. On seeing this, she accepts Islam over her pagan solar faith.

These and other early stories from Persia tell of Bilqīs being only half-human. The Qu’rān tells of her having the legs of a goat, while Persian lore tells of her being half Peri (a winged fairy spirit). This appears to have been done to discredit her and show her as being of a lesser status than Solomon.

The most significant version of the Queen of Sheba myth appears in the Kebra Nagast, the Ethiopian holy text. In this she is referred to as Makeda, the female queen of Saba. Ethiopians believe their account to be historical, and as such omit any mention that may reflect unfavourably upon her. This story tells of Solomon seeking merchants to supply him with building materials, one of which was Tamrin, the merchant of Queen Makeda. She hears of Solomon’s reputed wisdom, and the queen soon chose to visit to confirm this for herself. After speaking at great length, Queen Makeda converted to Judaism at his request.

On her return to Saba, Makeda gave birth to a son called Menelik. After being raised in Ethiopia, Menelik made the journey to visit his father Solomon and learn his wisdom. He was invited to rule but refused, instead returning home to Aksum with the Ark of the Covenant. The Ethiopians see this as their country being the resting place of the Ark as chosen by God, with Makeda and Menelik being the means to its arrival.

Queen Makeda is seen as the mother of Ethiopia and a direct descendent of the royal dynasty, established in the 14th century BCE. Former Emperor Haile Selassie had this lineage enshrined in the Ethiopian Constitution in 1955.

So, did the Queen of Sheba exist?