No Time For Fear — Politicking Girls: All Hail the New Women of Congress 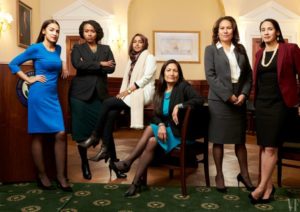 Happy New Year! Let’s dive right in and talk about the 116th U.S. Congress that was sworn in last week. A record number of women were elected to Congress in November 2018 — 102 women in the House of Representatives and 23 women in the Senate for a total of 125 women, out of 535 total Congressional members. The previous Congress had 110 women. Progress is progress and I am so unbelievably excited, but at the same time, angry that only 24 percent of Congress is female when women total 50 percent of the current U.S. population. * Note: CNN reports 125 women in Congress while NPR reports there are 127 women in the new Congress.

Some highlights from the midterm elections last November:

A few of the incoming female members of Congress got together in Washington D.C. shortly after midterms and instagrammed their meeting, and I am LIVING for photos like these. This is what I want my Congressional representatives to look like and be, and as I’ve said to many (many) people, I won’t be satisfied with the number of women in Congress until we are at 51 percent. Again, people, representation matters! Also, just in general, I think that drawing back the curtain and being more relatable can only help members of Congress. You can have reverence and respect for the office, while still attempting transparency and showing your constituents that you work for them, and are actively working to make their lives better.

January 3, 2019 was a record-setting day. Amid all of the awful, bone-crushing news coming out every hour of every day, not to mention all of the international news, it was refreshing to have some political news that didn’t make me want to curl up in a ball and cry or make me rethink having children someday. Nancy Pelosi controls the House Speaker gavel once again, the first woman to be House Speaker and one of the few people to occupy the chair more than once. I am in awe of her career, her stamina and her political will to survive. This NYT magazine feature about her should be required reading. A lot of people love to hate Nancy Pelosi, mainly for sexist reasons, because powerful women are instantly seen as a threat to all that white men hold near and dear. The GOP has made a target of her more than once. Yet through all that, she has persevered, survived and thrived, and takes her place in 2019 as the newest speaker of the House. Surrounded by her grandchildren, she took the oath of office on “behalf of all of America’s children.” It was an absolute pleasure to watch, and sent chills up my spine.

Moving on — all hail the new women of Congress! I am so pleased to see a more diverse, female-led Congress than ever before — it makes me hopeful that change is possible, slowly but surely. It makes me hopeful that the current administration’s feet will be held to the fire, as it were, and just maybe, our government will remember that they represent the people, not special interest groups and big money corporations. The new women of Congress won’t answer to the same old, same old, and are determined to prove their naysayers wrong and make change happen. I think that is admirable — it is so easy to become cynical about government and politics, and we need fresh talent and young people to dive right in and (quite literally) save the day.

To conclude, if you look at no other links, please look at these:

As Emily Dickinson once wrote:

Hope is the thing with feathers, my friends. May 2019 bring more good news, positive political
changes for the United States and around the world, and a more just and equitable world for girls and women everywhere.