No Time For Fear — Politicking Girls: Critical Conditions on Nauru 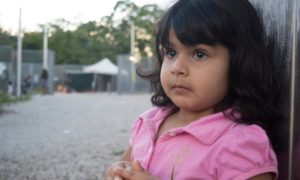 Nauru is a small island nation in the South Pacific, and has hosted a processing center for refugees since 2001, with a 4-year break from 2008-2012. The processing center is run by Australia’s border security, and hosts a large amount of women and children refugees, some of whom are seeking asylum in Australia.

Lately, things at Nauru have reached a tipping point, with many young refugees critically ill and needing to be hospitalized. Similar to the ongoing crisis at the U.S. border, the crisis at Nauru has doctors on the island feverishly writing medical referrals in an attempt to get their patients moved off of the island and onto mainland Australia. The Guardian reports that young refugees are critically ill after refusing food, water and medical care; a 12-year-old girl was taken to a hospital on Nauru after attempting to set herself on fire. Reports say that her family and friends intervened, but the girl did sustain some injuries. Other children saw the girl’s attempt, and last week a psychiatrist on the island recommended the girl be moved to Australia. A number of refugees have attempted to kill themselves by setting themselves on fire, including multiple children. Roughly 120 children are being held on the island, some of whom have lived their entire lives in the processing center.

The Guardian reports that a 17-year-old girl, S, is being treated and referred to a hospital off of the island, although it is unclear if the move will actually happen. A source familiar with the girl’s condition told the newspaper that previously, she had been one of the most promising children on the island, and had a dream to become a doctor in Australia and help others. “Now, she is on food-and-fluid refusal and begging to die as death is better than Nauru.”

Last week, as well, a critically ill 12-year-old boy weighing 36 kg (79 lbs) was airlifted to Brisbane with his stepfather, mother and sister after he refused to be separated from his family in order to get treatment. Sources on Nauru say they are increasingly worried about the “contagion” of children committing self-harm and/or refusing food and water.

Human rights groups are banding together to demand the removal of all children from Nauru by November 20, calling on the Australian government to “act urgently to guarantee the health and wellbeing of the children and their families.” The advocacy groups calling for this include: World Vision, the Australian Medical Association, the Refugee Council of Australia, Oxfam, Save the Children and Amnesty International.

It is so hard to read these stories and hear this news and not despair at the world. Children are suffering, children are dying, all the time. It seems like awful, heartbreaking, devastating news is ever-present, especially with the 24/7 news cycle and constant social media. It’s hard to know what to do, how to help, how to fix all the injustices in the world. Just remember that you do not have to do it alone — as Mr. Rogers once said: “Look for the helpers.” I’m going to leave you with one of my favorite quotes, and encourage you to get involved in whatever way you can, even if it is just in your local community.

“Unless someone like you cares a whole awful lot, nothing is going to get better. It’s not.” – Dr. Seuss.