No Time for Fear — Politicking Girls: Disgrace at the U.S. Border 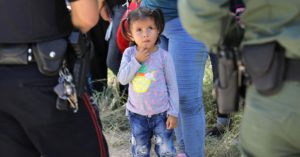 Ever since November 8, 2016, I’ve been lowkey angry and the anger ebbs and peaks with certain actions of the current presidential administration — but nonetheless, is ever present. This past week, that anger has hit a peak, for sure.

The news that the U.S. government has authorized the separation of families seeking asylum at the southern U.S. border is worrying, horrifying and downright abhorrent. This past week, due to some incredible journalism, the American people and the international community got a glimpse of the conditions of migrant children who have been ripped away from all they hold dear. I’m not going to recap it all, but for an overview on the whole awful situation, I would suggest checking out the following links:

These families aren’t coming to the United States just because, they’re risking it all and trekking hundreds of miles because staying in their countries of origin is too dangerous. Separating these families is horrific and will cause emotional scars that will last for a lifetime.

Last week, all four living former First Ladies of the United States came out against the current administration’s policy — and things like that rarely happen.

Former First Lady Rosalynn Carter denounced the policy in a statement released a week ago by the Carter Foundation. “When I was first lady, I worked to call attention to the plight of refugees fleeing Cambodia for Thailand. I visited Thailand and witnessed firsthand the trauma of parents and children separated by circumstances beyond their control. The practice and policy today of removing children from their parents’ care at our border with Mexico is disgraceful and a shame to our country.”

Former First Lady, Senator, Secretary of State and presidential nominee Hillary Clinton briefly voiced her opinion on Twitter and then expanded in a series of tweets calling the separations a “humanitarian crisis.”

“Every parent who has ever held a child in their arms, every human being with a sense of compassion and decency, should be outraged…We should be heartbroken to see families torn apart, but we should not be hopeless…We should be a better country than one that tears families apart, turns a blind eye to women fleeing domestic violence, and treats frightened children as a means to a political end,” she said in tweets and later during a speech at the Women’s Forum of New York.

Former First Lady Laura Bush wrote an op-ed in the Washington Post calling the policy cruel and unnecessary. She wrote: “I live in a border state. I appreciate the need to enforce and protect our international boundaries, but this zero tolerance policy is cruel. It is immoral. And it breaks my heart. It is our obligation to reunite these detained children with their parents — and to stop separating parents and children in the first place.”

Time Magazine released its new cover last Thursday, with the now-iconic photo of the crying 2-year-old girl in the pink sweatshirt. The cover has a photo of the current president looming over the girl with the caption, “Welcome to America.” The cover, and the photo, breaks my heart for several reasons. There is a little bit of controversy because the girl was actually never separated from her mother; but thousands of children were, in fact, separated from their parents. Let me repeat: even if this little girl was never separated from her mother, thousands of children were. That fact alone should cause every decent human being to be concerned and be moved to action.

The administration backtracked on the policy, but thousands of children still need to be reunited with their families. Despite all of this awful news, though, there are some bright spots. Like this article — a couple in San Francisco started a Facebook fundraiser that ultimately raised $15 million (and counting) for the Refugee and Immigrant Center for Education and Legal Services, or Raices. Raices is a nonprofit that provides legal defense services to immigrants and refugees in Texas.

This time in American history, and detaining these children specifically, will be in our future history books, along with shameful episodes in our past like Japanese Internment Camps during the 1940s. I’m not going to lie to you all, it is REALLY hard to have hope and be hopeful lately. This news is absolutely soul crushing, and if you need to take a news break, please do so. Self care is always important, but especially at times like these.

I say I find it hard to have hope, and yet, I still believe that there will be a better future for everyone. Change is coming, eventually, and let’s greet it when it does.