No Time For Fear — Politicking Girls: Get Out The Vote! 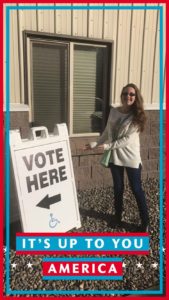 Going to my polling place to vote with my Dad in 2016. Photo Credit: Woody Daugherty.

Tomorrow, Tuesday, November 6, is Midterm Elections 2018 in the United States — the day all of us (or most of us) have been waiting for. Tomorrow is a day to exercise our constitutional right to vote and to make our voices heard on issues that matter to us.

I’ve always loved the idea of voting. When I was in kindergarten, during the first presidential election that I can remember (Bush v. Gore), my school held mock elections in our school and students got to go into actual voting booths and vote. When I was growing up, my parents used to take me with them when they voted, whether it was a local school board election or a presidential election. And I think it is so incredible that people get to have a say in their government. Of course, there are people who say that no one actually gets to have a say, that we can elect people to represent us that ultimately serve their own interests and might forget about the people who elected them etc. But I have to believe that my vote, my one vote, can make a difference. Because if I don’t believe that, if I don’t think I can affect change in my local community, on a state level, and on a federal level, then what is the point? You can be disillusioned by voting and your government, and still perform your civic duty and make your voice heard, if not for yourself, then for the next generation.

People have fought and died all over the world for the chance to vote. Most women in the United States didn’t have the right to vote until the passage of the 19th amendment in 1920. And all women of color and other women in minority groups didn’t get the right to vote until decades later. Some people still, in 2018 America, are having their vote suppressed by voter ID laws and/or intimidation tactics. I am not going to throw away what my foremothers fought for throughout the 19th and 20th centuries — I am going to vote. And if you are able to and old enough to vote, you should too.

Especially, in this political climate, making your voice heard by activism and protests and petitions is crucial. But even more crucial is that you make your voice heard at the ballot box. Some people in power might have become complacent and might seek to uphold the status quo and roll back hard-won rights and protections. The only way we can shake people, the political establishment and the minority in the United States who seek to control women’s bodies, loosen gun laws even further and deny protections to our LGBTQ+ friends and family is to vote. Youth turnout is crucial, especially for a non-presidential election, where youth turnout has been historically low.

Marilyn La Jeunesse at Teen Vogue wrote: “But, it’s not just the election that the youth hold in their power, it’s the conceptual power over the future policies and shape of the government. With bills on terminating the Environmental Protection Agency and defunding Planned Parenthood coming up in Congress, youths voting for politicians who represent their interests can heavily impact the resulting legislation. Youth energy proved vital during the civil rights movement in the 1960s, and again during the Vietnam War. That energy is matched by today’s young people at the polls and in the streets; it can change politics again. Youth casting votes for politicians who represent their interests can radically alter the future of the U.S. government.” 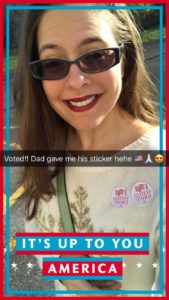 It is easy to be disillusioned when you do not see yourself represented in government — according to a Congressional report, the average age of members of Congress is 60 years old. This is the oldest in Congressional history. Of the 535 members of Congress (435 in the House of Representatives and 100 in the Senate), only 112 members are women, which is a record number. Research from the U.S. Census Bureau in 2015 shows that Millennials now outnumber Baby Boomers, 83.1 million to 75 million, and more diverse than the previous generations. You can be disillusioned, but still, voting is a way for you to affect change. It might come more slowly than you would like, but as Martin Luther King Jr. once said: The arc of the moral universe is long, but it bends toward justice.”

A few bright spots in all of the midterm noise: youth turnout, so far in early voting, is higher than in the 2014 midterms. Early voting in Texas and Georgia by young people is up nearly 500 percent in both states.

In Kansas, 19-year-old college student Hannah Nuss drove three hours from Iowa to Kansas in order to vote after there was a problem with her absentee ballot registration. She didn’t have a car so she ended up hitching a ride with a friend so she could go home and vote.

If you need some more information and/or inspiration, check out these two links:

Here’s Your Guide for Voting in the Midterms, for Teens and by Teens

Michelle Obama Wants Us to Break a Dangerous Cycle

As for me, I mailed my absentee ballot off last week — I’ve only been able to vote in person once, so I am a little bummed about not getting a sticker this time (you’re never too old for them!) but I am hopeful about the election results for my district, and on the state and federal level.

Get out and vote, people! The future of our country depends on it.