No Time For Fear — Politicking Girls: Girls of The March For Our Lives 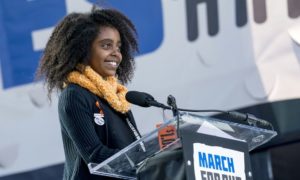 Naomi Wadler speaks during the March for Our Lives rally in Washington D.C. on March 24. Photo credit: Andrew Harnik/AP

Last weekend in Washington D.C., all around the United States and all over the world, hundreds of thousands of people rallied for and pleaded with the federal government to enact sensible gun control. The March for Our Lives movement sprung out of the Marjory Stoneman Douglas high school shooting where 17 people lost their lives on February 14. The movement for gun control in the United States has been growing for years — and while still grieving and dealing with the aftermath of the shooting, the Parkland survivors quickly mobilized to fight for change.

Instead of a column of me just yelling into the void about all things that make me angry about this topic (and there are a lot), I’m going to talk about the girls of this movement and how and why they give me hope for the future.

Emma González, Sarah Chadwick and Jaclyn Corin, among many other young activists, have been essential to the movement and all took part in the rally in D.C. on March 24. I remain in awe of their poise, eloquence and determination in the face of so many different obstacles and admire them for fighting for what’s right. They’re fighting for a world where children in the U.S. don’t have to fear going to school because they might get shot. Mass shootings happen almost daily in the United States and we as a country have become so numb to it that sometimes it doesn’t even register or make national headlines. It’s overwhelming. And these young people are fighting against all odds, against politicians, against structural barriers to change the conversation about gun violence in America.

While reading coverage of the March, I came across this article in the Guardian about 11-year-old Naomi Wadler, who was the second-youngest person to speak at the March [The youngest was Martin Luther King Jr’s nine-year-old granddaughter, Yolanda Renee King]. I watched a livestream of Wadler’s speech on Saturday and was absolutely stunned and inspired by her articulate, passionate, incredible speech.

During her speech, she paid tribute to Courtlin Arrington, an African American teenager who was shot and killed at her high school in Alabama last month. Wadler said: “It is my privilege to be here today. My voice has been heard. I am here to acknowledge their stories, to say they matter, because I can and I was asked. I am here to acknowledge the African American girls whose stories do not make the front pages of every national newspaper, whose stories don’t lead on the evening news.”

A few weeks before the march, Wadler also led a school walkout on March 14 at her elementary school in Virginia. 60 of her fellow classmates participated in the walkout, and the children handed out a handwritten press packet to a journalist who had come to the school to cover the event.

Watching girls like Naomi Wadler and Emma González and Sarah Chadwick and Jaclyn Corin and the thousands of other girls, and boys, mobilize for change and push back against the status quo is simply awe-inspiring. Adults and the people in power say that nothing can be done. Nothing can be done to stop children from being killed at school, and we all have to send our thoughts and prayers and move on — until the next mass shooting, and then the cycle repeats. These children look at all of the excuses and in the words of Emma González, they call BS. They make me have hope for a better future. A future where I don’t have to scan for the exit every time I go to the movie theaters and a future where my children, if I choose to have them, won’t have to be afraid of being shot in their classrooms.

Girls like Naomi Wadler are going to change the world. They are changing the world. And the people in positions of power better get on board or get out of the way.

For more information, check out these links:

Teens started March for Our Lives, but all ages participated

The Fearless, Outraged Young Protesters at the March for Our Lives