No Time For Fear — Politicking Girls: Malala’s Return to Pakistan 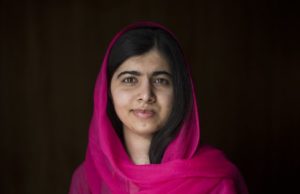 Last month, education and human rights activist Malala Yousafzai returned to her native Pakistan for a short visit. The 20-year-old Nobel Peace Prize winner gave a brief speech about her homecoming and the state of girls’ education in Pakistan and worldwide. It was her first time returning home since October 2012, when the then-15-year old was targeted and shot by the Taliban. Since the shooting and her subsequent recovery in the United Kingdom, she has lived in Birmingham with her family. Last year she was also named a U.N. Messenger of Peace with a new role focusing on girls’ education. Malala is currently studying philosophy, politics and economics at Lady Margaret Hall, Oxford in the U.K.

On her visit to her home country last month, she was there for four days. Details of the trip were kept tightly under wraps for security reasons; the Taliban have previously said that they would target the activist again if she survived the 2012 shooting. Reaction to her return to Pakistan has been mixed. Some Pakistanis say that the young activist represents a new, modern vision for their country; other more conservative Pakistanis have said that she is a puppet of the west.

She made a speech at the prime minister’s house in Islamabad and said that it was not her choice to leave Pakistan, but that she had always dreamed of returning. “And I want to be able to move freely in the streets and meet and talk to people peacefully, without any fear. I still can’t believe I am here,” she said. “It is literally a dream.”

In her speech, she also talked about how conscious she was of the difficulties that girls and women face in Pakistani society, and how she will continue to fight to “educate girls and empower women” for the “betterment of Pakistan.”

In an interview with the Globe and Mail, Malala was asked about her critics, going back to Pakistan, the Malala fund and feminism. While reading the interview, I was struck by just how smart, articulate and poised she is. I’m looking forward to watching where she goes from here, and will be supporting her activism every step of the way. Because girls all around the world, from all ethnicities and backgrounds, deserve a quality education. The future is female.

If you’re looking for more Malala interviews, I highly suggest watching her interview with David Letterman on Netflix.