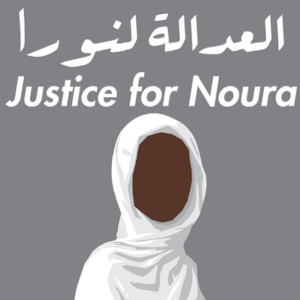 This week’s column will delve into a court case and situation involving sexual assault of a teenager. It is obviously an extremely sensitive topic, so if this at all would be triggering for you, please skip this week’s column, and I’ll see you right back at No Time For Fear — Politicking Girls in two weeks time. Thanks!

Last Thursday, a 19-year-old girl, Noura Hussein, was found guilty of premeditated murder and sentenced to death in Sudan. Her crime? Murdering her husband after he tried to rape her.

Her legal team has until May 25 to appeal the decision, and advocates for Noura have told NPR that they plan to do so. Noura has been held in a women’s prison since May 2017. Under a 1991 Sudanese law, marital rape is not considered rape, so it is not considered a crime.

Her parents tried to force her into the marriage three years ago, but she fled to the safety of her aunt’s house and refused to consummate the marriage. Her family then lied to her and told her the marriage was canceled, in order to get her to return home. Once she returned to her parents’ house, she was married without her consent and six days after the ceremony, her husband raped her as three of his male relatives held her down. NPR reports that the next day, the husband tried to assault Noura again, but there was a struggle and she killed him with a knife.

Yasmeen Hassan, global executive director of Equality Now, an international legal advocacy organization working on Noura’s case spoke to NPR about it. Noura has a team of 12-15 lawyers working on her behalf, but initially had no legal representation because the judge-appointed lawyer refused the case.

“Everything that’s happened to the girl from the time she was 16 at least has been a travesty of justice,” Hassan said. “Twenty years ago, maybe people would have let this go. But right now with the awareness of women’s rights…and in this era of the #MeToo movement, this is just not going to be able to stand.”

The goal of the hearing last week was to ask the family of Noura’s husband if they would accept money in exchange for his death. Hassan told NPR that is a practice rooted in Islamic law. “They could have actually forgiven her and pardoned her or they could have taken money — ‘blood money’ as they call it — as compensation for the killing, but the family has called for her execution.”

Equality Now is calling for Sudanese President Omar al-Bashir and the country’s Ministry of Justice to grant clemency and dismiss the case. As of last night, a petition on Change.org called Justice for Noura had 293,183 signatures. The petition is protesting the use of the death penalty in her case. Activists and advocates in the United States, Australia and around the world are organizing an awareness campaign with the hashtag #JusticeForNoura, and planning rallies and other social media campaigns to raise awareness about the case.

I have a whole lot of things to say about this case, and almost all of it involves various curse words and screaming, but I will try and be brief. While it was heartening to see the Change.com petition’s signature numbers tick up 1000+ in the time it took me to write this post, I’m also just absolutely furious and heartbroken for Noura. To quote The Good Place, this is some forked up bullshirt.

There’s nothing I can say that hasn’t already been said. If I could bust Noura out of jail myself or turn back the clock and prevent her non-consensual marriage, you bet I would. This one girl’s story just makes me so sick, so sad, and so angry. Her story is only one of thousands of girls’ stories, but we’ll never know most of them. Progress always seems to be one step forward, two steps back, especially when it comes to girls and their autonomy. But despite all of this madness and invasive, ingrained patriarchal bullshirt that seems to be everywhere, all of the time, because these type of horrific stories aren’t just a one off, I still believe — change is coming, for Noura and for countless other girls around the world.

In times like these, more frequently than ever before, it’s important to remember self-care, and to actually practice it. When the nonstop deluge of disheartening news stories and personal/political events becomes a little bit too much, remember that it is okay to take a step back. It is okay to take a break and to regroup. Pick yourself up, dust yourself off and continue the fight. #JusticeForNoura