No Time for Fear — Politicking Girls: The 2018 Irish Referendum 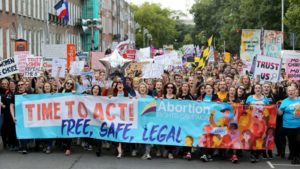 A few weeks ago, Ireland voted in a historic referendum on whether to repeal or keep the eighth amendment of the Constitution — a 1983 amendment that protects the rights of the unborn that has led to one of the most restrictive countries in the world in terms of reproductive rights. An exception to a total ban has been in effect since 2013, after Savita Halappanavar died of septicemia during a miscarriage. The abortion ban meant that thousands of women traveled abroad each year, mostly to the U.K., to access reproductive care.

Polls across the country were open from 7am to 10pm, and were being closely watched around the world. The final vote was 66.4 percent yes; and the turnout was 64.1 percent, which was the third highest turnout for a referendum since the adoption of the constitution in 1937, according to the Guardian. Abortion will now be legal in Ireland up to 12 weeks, and up to 24 weeks in exceptional circumstances; Irish citizens from all over the world flew back to Ireland to vote in the referendum.

To some, the results seem shocking, especially from a traditionally Catholic country. To others, this is the first step into the 21st century, and finally respecting that women are people and capable of making decisions about their own bodies.

Opponents of Prime Minister Theresa May have suggested that May is reluctant to take up abortion legislation in Northern Ireland because she needs the support of the anti-abortion DUP MPs to maintain her majority in Parliament. The 10 DUP MPs will be crucial to supporting May in a future Brexit vote.

Also last week, the U.K.’s Supreme Court ruled that Northern Ireland’s restrictive abortion laws are “incompatible with human rights legislation,” according to Buzzfeed News. In a 5-2 vote, a majority of judges found that the laws infringe upon Article 8 of the European Union Convention on Human Rights, “which provides a right to respect for one’s private and family life.” The court did say, though, that it did not have the jurisdiction to strike down the law because the case had been brought by an organization rather than a person who had been victimized by the law.

The common refrain in the Irish referendum were women saying something along the lines of “I’m voting yes because I have daughters.” The fight for reproductive rights worldwide, and the fight to shore up support for reproductive rights in countries where women currently access to abortion and birth control is crucial. There is no freedom until we are all equal. Let’s continue the fight, and continue to support women and girls all over the world, in all walks of life. Congratulations, Ireland, for letting women’s voices be heard!

Stay tuned for Contributing Writer and Ireland-native Michelle O’Brien’s take on the referendum in the next few weeks!