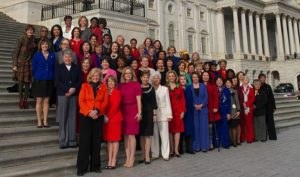 I have been a news and politics junkie for as long as I can remember, and I usually devour any and all news the moment I get a notification. But on Election Night two weeks ago, I came home from work, put my phone on silent and watched a few episodes of the Great British Baking Show — it was incredibly soothing and did wonders for my mental health.

I felt anxiety about the elections all day, and apart from reading a few news articles here and there, I decided not to obsessively follow them, like I usually do. Despite my best efforts, I still woke up a few times in the early hours of the morning and checked my phone for election results. So let’s dive right in.

The clear winners of midterms? Women. This election cycle was a historic one for women. Starting in 2019, the new Congress will have at least 125 women (out of 535 total members); 92 in the House, including 43 women of color and 23 newcomers; and 23 in the Senate. There were some historic firsts made, including:

A few of the incoming female members of Congress got together in Washington D.C. last week and instagrammed their meeting and I am LIVING for photos like these. This is what I want my Congressional representatives to look like and be, and as I’ve said to many (many) people, I won’t be satisfied with the number of women in Congress until we are at 51 percent. Again, people, representation matters! Also, just in general, I think that drawing back the curtain and being more relatable can only help members of Congress. I think members of Congress can have reverence and respect for the office, while still attempting transparency and showing their constituents that they are actively working to make their lives better.

My last bit of good news about the midterm elections: the election of 19-year-old Cassandra Levesque to the New Hampshire State Legislature. As a 17-year-old Girl Scout, she campaigned to end child marriage in her state, but was brushed aside and underestimated by a state legislator. New Hampshire law at the time set the age requirement for marriage at 13 for girls, 14 for boys, as long as they have parental consent and the approval of a judge. In 2018, the minimum age was moved to 16. The legislator said he “saw no need to change a law, more than 100 years old, on the basis of a request from a minor doing a Girl Scout project.” Instead of getting mad, Cassandra got even — and ran for the State Legislature, and won.

Aside from the fact that it is absolutely absurd of adults to think that children and young adults don’t have the right to weigh in on systems, laws and societal problems that can directly impact them, I think the most satisfying part about this is that another person under the age of 40 is involved in state/federal politics — we need all of the young people we can get! As an added bonus, the state legislator who didn’t take Cassandra’s campaign seriously did not run for re-election.

Check out these articles and interactives for more information:

They ran. They won. Now what? How female lawmakers work in Washington
‘Year of the Woman’ Indeed: Record Gains in the House
2018 Midterms: Youth Voter Turnout + Room for Growth

And remember, just because this one election is over doesn’t mean there isn’t more work to be done. It doesn’t mean you get to mentally check out until the next big election in November 2020. Definitely take a break from all the madness if you need to, but then get back in the fight. Volunteer for an elected official, start or join a grassroots group in your hometown, keep the conversation going about what you believe in and why. Together, we can all make a difference.