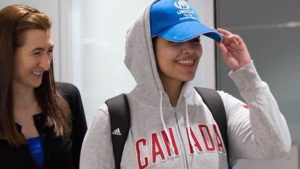 Recently, there has been an increase of girls and women fleeing Saudi Arabia — the New York Times has covered the issue numerous times, and published a new report on January 11, featuring a handful of women who had fled. The New York Times reports that the number of young women seeking to flee the repressive country has grown in recent years. And those who do flee the social and legal restrictions of their native country are flocking to social media to help plan and document their escape attempts. The popularity of social media platforms over the last 15 years has undoubtedly helped these women on their way to freedom.

Just this past week, 18-year-old Rahaf Mohammed was granted asylum in Canada after she flew from Saudi Arabia to Thailand on January 5, intending to travel to Australia. When she landed in Bangkok, a Saudi diplomat confiscated her passport. She then faced deportation from Thailand back to Saudi Arabia, so she barricaded herself in a hotel room and began turning to social media in an attempt to tell her story and ask for help to escape her family. Her tweets were soon noticed by Human Rights Watch and other rights organizations, and after international outcry, Thailand allowed her to stay in the country indefinitely while the U.N. considered her claim for asylum. On January 11, Canadian Prime Minister Justin Trudeau announced that Rahaf’s asylum claim had been processed and Canada was prepared to offer asylum. She landed in her new adopted country and was met at an airport in Toronto by Canadian Foreign Minister Chrystia Freeland, who welcomed her as “a very brave new Canadian.”

In an interview with the Australian Broadcasting Corporation, Rahaf said that she fled her country to be free from oppression and to be independent. “I wouldn’t have been able to marry the person I wanted. I couldn’t get a job without permission,” she said. “Women can’t even travel on their own.” Under Saudi Arabia’s male guardianship system, women (regardless of age) have no right to make basic life decisions, like traveling, getting a passport or go to school — they have to have permission from their male guardian, usually a father, husband or brother. Women only just “received permission” (ugh) to drive, which we covered in this column. The announcement was made in 2017, but women actually didn’t get on the road until June 2018.

Rahaf’s family has since denounced her as mentally unstable, and disowned her. But regardless, she said she looks forward to starting her new life in Canada and paying it forward to a country that has given her so much. “Today and for years to come, I will work in support of freedom for women around the world,” she said. “The same freedom I experienced on the first day I arrived in Canada.”

Rahaf will definitely have to get used to the weather, the snow, and the culture, but she is now free to pursue her dreams and have the same rights as any other Canadian teenager. That is something worth celebrating. But let’s not forget about the hundreds of thousands of girls and women in Saudi Arabia, and around the world, desperately trying to live their lives free of repression, judgment and fear. May they all find peace and happiness very soon.