If you’re like me, you’re already thinking about your next planner for 2019 — even though we have half the year left to go, and I have a perfectly lovely planner already that helps me keep my life organized (for the most part). So when I heard about MissHeard Media’s new project, a Girl-Powered planner for 2019, I was immediately intrigued. Read on for a Q&A with Lindsey Turnbull, the woman behind this new planner, and how she plans to make the planner a reality. 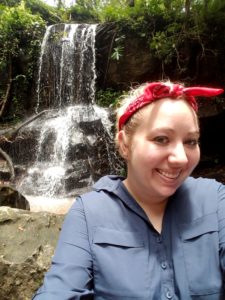 SD: Why did you decide to make a girl powered planner?

LT: Obviously, I am passionate about empowering tween and teen girls. A lot of people don’t know that my background is in history, specifically race/gender/museum studies. Throughout my academic career, I met so many amazing, courageous, inspiring young women — and girls — that contributed to American history in some way.

I realized I didn’t learn a lot about historical actresses until college. How unfair is that?! There is a certain joy in reading about an amazing woman that stood up for her rights and made change, like “Hell yeah you did, girl!” I love that. The more “into” history you get, the more you learn just how many girls and women really did history-making things. Girls’ history is American history and I wanted to showcase that.

The planner combines all things I love: empowering young women, history, and to-do lists.  It’s an introduction to some really fascinating historical and contemporary figures, and I hope it inspires girls to see that it is possible to be a young woman and make a difference.

LT: Well, my friend Abbie is doing most of the creative part — the layout and design of the planner. She’s excellent and I’m really glad to work with her. I don’t know that I’d call my part “creative.” I just sort of had this idea one day, based on a planner I had gotten as a gift, and ran with it.

SD: How did you narrow down which girls to feature in the planner?

LT: This was the hardest part! I added a big disclaimer in the middle about the “scope” of this project. As a historian, I feel like I always had to add a ton of context and really focus the scope so I could accurately talk about race and womanhood without writing something the size of an encyclopedia. Even when you set parameters, there’s always more to find and discover, and at a certain point, you have to just accept that you can’t include every single interesting detail.

This project has been the same. I decided to make 25 [years old] the soft cutoff, I wanted to focus on American girls because that’s what I know most about (although you will see that a few non-American girls are featured), and I tried to represent a lot of different fields — literature, politics, music, art, sport, etc.

Basically, I tried to include as many girls and young women as I could. I even added a section with young women whose birth dates were unknown because they were born so long ago. I added a section on “classic must-read” books and movies so I could sneak in some more authors that deserved a shout out. There are some inspiring quotes peppered in from women older than 25 when they did their great thing. I cheated, I guess, for the greater good.

Eventually, I had to cut myself off and say “you’ve done enough.” I know it’s not perfect, and I’m a little bit of a perfectionist, so you have to understand that that was a hard step. I know there are people I am missing that very, very much should be included. I hope that people who purchase the planner will feel inspired to tell us who we left out and what made/makes them special so we can add them in. I’d love for the planner to evolve every year.

SD: Who’s been your favorite girl to research and write about and why?

LT: Is it cliché to say all of them?! There’s not too much writing here, because of the space constraints of the planner. Most entries are something like “1988 b. Lindsey Turnbull, MissHeard Media founder,” for example. It’s supposed to be an introduction and an overview. It’s easy to get carried away with excitement, and I did have to edit down some long entries.

Gwendolyn Sanders is one of my favorites. She was in seventh grade when she helped lead the Children’s March for Civil Rights in Birmingham. The idea of putting children out there on the front lines facing violence was controversial. About a thousand students marched. The white police commissioner ordered police and fire departments to use fire hoses and police dogs to break up the protest. The images of this protest are some of the most famous to come out of the movement. Hundreds of children as young as eight were arrested, and JFK and the DOJ had to eventually get involved. The Children’s March was one of the things that really motivated President Kennedy and others to pass a Civil Rights bill. Gwendolyn Sanders is an American hero.

There’s a Drunk History episode about her that came out this year (tweens, teens, please consult your parent before watching Drunk History)!

It’s so hard to pick even a handful of girls, but that story in particular stands out.

SD: Why do you think this planner is important for girls and teens to have?

Too often girls and young women — especially marginalized girls — are not seen in American history. These stories should be told and girls deserve to see themselves represented in our nation’s history.

And not just for teens! A lot of the folks featured have largely flown under the radar in general. Some of the more contemporary folks might be completely new to adults! Do adults know that Yara Shahidi, of black-ish and grown-ish started Eighteenx18, a foundation to get 17-and 18-year olds to vote in midterm elections? Adults can learn too. You’re never too young or too old to learn something or raise your voice or make a difference. 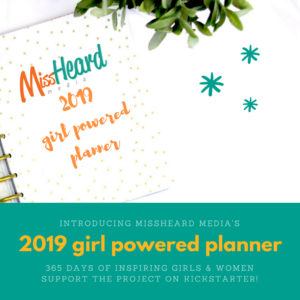 SD: What are you hoping to achieve with your Kickstarter campaign?

LT: I am hoping to raise $5,000, which will cover printing and binding costs of the first 1,000 planners as well as shipping costs, a UPC/bar code so that we can offer the product to bookstores, editing and design. With a $20 pledge, supporters get an early bird copy of the planner with shipping included. I tried to add a lot of levels and cool perks to encourage people to support.

This is one of the biggest projects I’ve done in a long, long time, and one that is very close to my heart. I am so excited!

If you’d like to support MissHeard Media’s girl-powered planner, they have a Kickstarter campaign with tons of cool perks that is running until July 4 — just a few short weeks to donate to an awesome cause! If you don’t have the resources to donate, please consider spreading the word and sharing the Kickstarter link on your social media platforms.