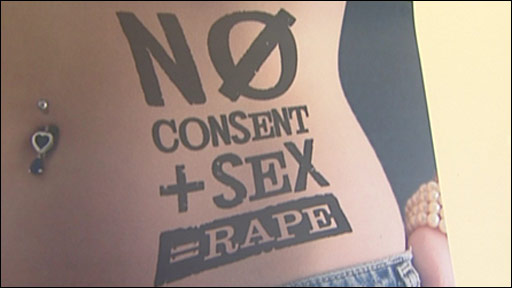 Anti-rape police campaign poster.
http://news.bbc.co.uk/1/hi/england/devon/8179353.stm
In the past week, I have been truly appalled by the attitudes being demonstrated by our politicians towards rape. On both sides of the pond we have had controversial statements given to journalists which demonstrate a less than enlightened view of this traumatic and horrendous crime.
In America, current Congressman and Missouri Republican Senatorial candidate Todd Akin insulted women across the country with his extreme views on abortion. During the interview for KTVI-TV the Congressman was asked if he would consider an exception to an abortion ban for pregnancies which were the result of rape. His response was truly shocking:

It seems to me, from what I understand from doctors, that is really rare. If it‚Äôs a legitimate rape, the female body has ways to try to shut that whole thing down.

It is beyond comprehension that this educated man could have this view on rape. Aside from being medically unsound, his use of the term ‚Äúlegitimate rape‚Äù lends credence to the belief that there are varying degrees of culpability for rape. Carrying this man‚Äôs logic through, a woman who was subjected to a violent rape which resulted in pregnancy was no victim at all. She must have wanted it, she‚Äôs pregnant isn‚Äôt she? Little wonder Republican Presidential nominee Mitt Romney has called for the would-be senator‚Äôs resignation. The Democratic party‚Äôs claim that now is a scary time to be a woman ¬†seem to have some foundation within the views of the radical right.
In the UK, that horrible phrase ‚Äúlegitimate rape‚Äù also reared its ugly head in the furore surrounding Bradford MP George Galloway‚Äôs comments on the Julian Assange‚Äìwho is wanted in Sweden to face sexual assault charges‚Äìdeportation case. Speaking about the allegations, Galloway claimed that Assange‚Äôs behaviour was no more than ‚Äúbad sexual etiquette:‚Äù

Let me tell you, I think that Julian Assange’s personal sexual behaviour is sordid, disgusting, and I condemn it. But even taken at its worst, if the allegations made by these two women were true, 100 per cent true, and even if a camera in the room captured them, they don’t constitute rape.¬†At least not rape as anyone with any sense can possibly recognise it.

Referring to the allegations that one woman woke up to find¬†Assange having sex with her after engaging in consensual sexual activity the previous evening, Galloway said that ‚Äúnot everybody needs to be asked prior to each insertion.‚Äù His comments prompted charity Rape Crisis to respond that his understanding of rape was ‚Äúfactually inaccurate‚Äù and that if a woman is asleep, then consent has not been given. The idea that a woman having sex with someone once entitles them to have sex with her again without consent is the kind of thinking which legitimised rape within marriage for hundreds of years.
We supposedly live in the modern world and it‚Äôs time that our politicians‚Äô attitude to women was brought up to date. Equality between the genders will never be achieved while there is still an assumption that, on some level, women are asking to be raped. Legitimate rape? – I don‚Äôt even understand the phrase.¬†
Rape is Rape ‚Äì full stop.
-Vhari Finch
Junior Girl
Girl Museum Inc.
DONATE NOW