Sindy: The Girl Next Door 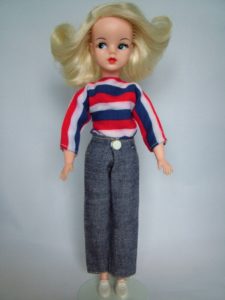 Sindy in her classic Weekender outfit.

Sindy made her arrival on the toy scene in 1963. She was the wholesome girl next door to rival the glitz and glamour of Barbie. She was even one of the first dolls to have her own television advert.

Sindy was always impeccably dressed. Her clothes followed many of the prevailing fashions of the time with her neatly cut bob, mini-skirts, maxi dresses, capes, hot pants and pedal pushers. She was ‘the girl you love[d] to dress’ and rightly so. Her designers were Foale and Tuffin who kept Mary Quant’s wardrobe in check. She was kitted out in patriotic red, white and blue when she made her outing in her Weekender outfit. Sindy was also a scene setter with her red two-seater sports car, scooter and horses. Neither did it end there as Sindy had a record created for her by the fictional band, Cliff Warwick and the Dollybeats. Later, boyfriend Paul was introduced. Some say he was named after Beatle Paul McCartney. But in the doll world, it was Sindy who remained firmly in the limelight.

Sindy has had her ups and downs. She didn’t quite adapt to the brashness of the 1980s. This was despite the best efforts of Princess Diana’s wedding designers, the Emanuels, who had replaced her knee-length dresses with full-length evening gowns. She later had a bust-up with Barbie when a lawsuit was filed against her following a redesign of her face in 1992. Sindy nearly disappeared altogether when Woolworths closed its doors. However, Sindy didn’t need to be flashy like Barbie as she has left behind her own style and grace. Hopefully, time has allowed the English Rose to finally come up smelling of roses.