Singing among the stars 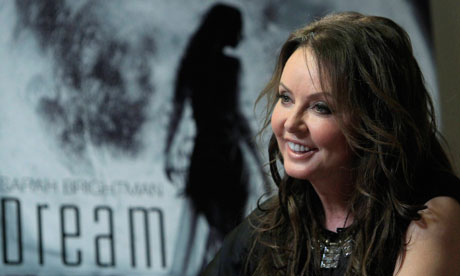 Sarah Brightman has booked a trip to the International Space Station and hinted at doing a ‘space concert.’
Photo: Sergei Karpukhin/Reuters
http://www.guardian.co.uk/science/2012/oct/11/sarah-brightman-space-station
West End and Broadway and singing sensation Sarah Brightman is well known for her hit records, starring stage roles, and high profile relationship with Andrew Lloyd Webber but she is now embarking on a new adventure – into space!
At a press conference in Moscow, the singing star announced that she had been approved as a space tourist and booked a seat on a Russian Federal Space Agency Rocket to the International Space Station sometime in the next few years, after her 2013 tour.
Since Space Tourist¬†Dennis Tito became the first traveller to pay for a trip into space out of his own pocket in 2001, seven others have followed in his footsteps, including Anousheh Ansari who was the first female private space explorer in 2006 and wrote a blog about her experience in space that is inspiring to any woman aiming for the stars.
Despite the fact that women are not thought of as pioneers of space travel the first Briton, South Korean and Iranian that have gone into space have all been women! 56 Women have gone into space so far and Sarah Brightman seems to be another woman that dreams of the stars: “I think of myself not just as a dreamer, but as a dream chaser,” she says. So here’s to Sarah and achieving her dream of being able to sing among the stars.
-Emma Hatherall
Junior Girl
Girl Museum Inc.
DONATE NOW