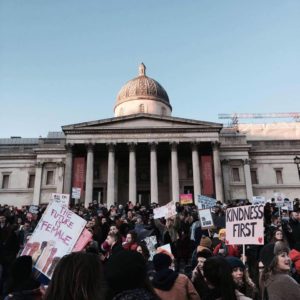 Outside the National Gallery in London at the Women’s March, January 2017. Photo Credit: Megan Joyce.

In 1970, activists from the Women’s Liberation Movement caused a public stir at a Miss World beauty pageant at the Royal Albert Hall. They organised to challenge the assumptions behind the show and its links with big business. The WLM were speaking out against the organisers and the press who publicised them. Their slogan was “We’re not beautiful, we’re not ugly, we’re angry!”

I met Sue Finch who was involved with the protest in 2016. I was organising various events for my university’s History Society and wanted to discuss a topic that would be relevant and meaningful for students. It was at a time when I felt very disillusioned with the world with the continuing public displays of sexism and misogyny, seen most especially with the US election. How could a world support and like a man who spoke so awfully about women?

Over forty years ago, Sue Finch and the women involved in the Miss World protest shared the same feelings towards the pageant’s presenter, Bob Hope. Hope referred to the pageant as a “cattle market” and spoke of “checking [the] calves. He also promised the audience that he wasn’t a “dirty old man” because he never gave women a second thought, his first “covers everything.” Women’s rights and opportunities in Europe and North America may have improved somewhat; but the same old rhetoric is continuing today, which perpetuates the idea that women should not be taken seriously.

I was in two minds about the protest, before meeting Sue. I didn’t feel obliged to defend the Miss World beauty pageants but after reading so much about the 1970 winner, I couldn’t help but feel sorry for Jennifer Hosten. She won the pageant and was the first to do so from Grenada and the first woman of African ancestry to hold the crown. Regardless of what I thought about the whole contest, I thought this might have been a positive aspect to come out of the show considering the fierce racial discrimination of the 1970s. I had misunderstood. This protest was not about the female contestants, it was a protest against the organisers of the contest and the way in which the media promoted them.

I knew the Miss World pageants of today were popular. But I had not realised that millions watched the early contests in the UK every year. Families would sit down and watch the pageant in the same way families today watch the popular TV talent shows. The 1970 pageant was on television. Many would witness the WLM group stand up, shout and throw flour bombs down to the stage. Individuals from the group were arrested, including Jo Robinson, who joined Sue at our university event. What was so remarkable was the casual way in which Sue and Jo spoke of their involvement. They seemed confused as to why a group of students would be so interested in their stories. But here were two women (one of which was 9 months pregnant at the time of the protest) who made a stand against society and participated in a far broader movement that paved the way for future changes.

How much has changed though? By the 1980s, the BBC had stopped televising the pageant in the UK. And yet Sue and others from the 1970 protest were back and demonstrating against the same thing and the same show in 2011 when the pageant was held in London. It’s hard for me to say attitudes towards women have changed, especially when movements such as the #MeToo campaign are so prominent. Yet were the efforts of the 1970 protesters meaningless? Not at all. The protest inspired women to take up the fight against misogyny and challenge the way in which the female body was shown. Mary Beard has even spoke of the importance of this protest for exposing how male power and the beauty industry were so intrinsically entwined. Forty years later, a group of university students were asking two of the protesters how they would deal with issues concerning women today.

I wanted to know whether Sue thought the women’s movement had changed. I remember talking to her after our event and she spoke of feeling re-inspired and cheered by the various ideas. Everyone felt disheartened before the event, with the election of Donald Trump and what it meant for millions of women. And yet coming together and speaking about women’s issues past and present provided us with a sense of meaning and determination to challenge assumptions and celebrate female diversity.

Fighting for women’s rights will directly impact the lives of millions of girls. I live in hope that activism will better the lives of future generations for years to come.

It’s been two years since I organised that talk and I owe a certain amount to the women in that university room. I attended my first women’s march in January 2017. There, I walked alongside thousands of others who were committed to fighting for equality. The world and its language is still a disillusioning place but this is not reason enough to lose faith in standing up for women across the globe.