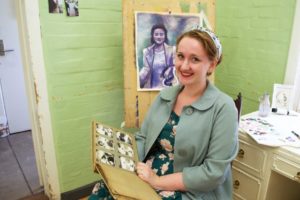 Today, we e-meet the emerging visual artist Alex Beckinsale as she arrives back home from a creative journey to Masterton, New Zealand. Hailing from Adelaide in South Australia, Alex’s process of reinvigorating the old and the forgotten images of the past to invoke strong bonds to which normally a viewer would feel a void between the space of life and photograph.

Alex graduated from the Adelaide Central School of Art in 2016 and found a sense of direction from her experiences in New Zealand. To get back into showing and reviving her presence in the South Australian art community, she entered the prestigious Emma Hack Art Competition to which she placed as a 2018 Finalist with her piece “Missing.” In response to this year’s theme of “Culture,” the piece embodies a blackened void in the place of where a woman’s face should be, as if she were being erased. A sense of abandon haunts this “photograph” as Alex explores the loss of identity and thus, how culture can be lost through the passages of time.

Funnily, she said that she loves going through op-shops (second hand stores) to find inspiration. It becomes a world of attachments, that these things used to be meaningful to someone whereas when in this store, they have lost their sense of sentimentality.

Alex says about her finds and her art: “Using painting and drawing to depict them feels like a continuation of their narrative; like they’re still being recognised and are not yet forgotten. I hope that my art has the ability to separate the individuals I depict from a sense of historical nostalgia. That it allows them to be recognised as real people, complex and nuanced, not just historical curiosities. Although I do deal with the heavier themes of death and decay, many of the photos I find are really fun and goofy. They really just speak to what it is to be human, to the absurdity and joy of life.”

Alex plans to get through all of her material from New Zealand, so keep a close eye on her Instagram where she regularly updates! Alex is also a part of a brand new artist-run studio in Adelaide called Collective Haunt, which came about because a lot of the galleries and art spaces have been closing up recently. She spoke with me about her experience there. “It’s great to be part of something that’s going to bring a bit more art back to the city and it’s with an incredible group of artists as well! So if you ever end up in S.A., you should definitely visit us! It’s got a gallery as well as studios, so you can come in, see some art and have a cup of tea with us, all at the same time!”

Check out more of Alex’s art here on her website.