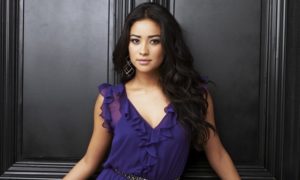 Pretty Little Liars is based on the series of books by Sara Shepard and debuted in 2010. It centres around four teenage friends who are brought back together when the remains of their missing friend are found. The series follows them as they try to solve the mystery of who killed her, all while dealing with the mysterious ‘A’ that torments them throughout the series. The series ran for seven years and the character profiles contain spoilers.

Emily Fields
Throughout the series we see the girls grow from scared teenagers to resilient women. Emily is arguably the character that experiences the most growth in her personal life. In the first few episodes we see Emily struggle to deal with the feelings that she has for her friend Maya. We also learn in flashbacks that she was in love with Alison. These flashbacks show us the cruel side of Alison, who tells Emily that kissing her is only “practice for the real thing”. In season 1 episode 9 she is forced to tell her friends about her feelings for Alison by Detective Wilden. ‘A’ then sends a letter to her parents telling them about their daughter. They are not supportive and this causes Emily immense pain. Over time her parents learn to accept Emily for who she is. Her happiness is short lived, however, as her first girlfriend, Maya, is found dead at the end of Season 2. Her death, while devastating, makes Emily tougher. She had been called the “weak link” many times by ‘A’ but Season 3 saw a more resilient Emily. When she was attacked by Nate St. Germain (the man who killed Maya), she fought back and killed him in self-defence. We see more personal growth for Emily in the relationships she has in the later seasons. She is confident and knows what she wants and won’t settle for less.

Away from her relationships, Emily was an accomplished swimmer who had enough talent to earn scholarships to a number of top colleges. This all ended after she injured her shoulder while pushing her friends out of the way of an oncoming car driven by ‘A’. We learn that she did end up going to college, but dropped out after the death of her father. When she comes back to Rosewood, she decides to donate her eggs to earn some money. This leads to one of the more troubling storylines of the series. Emily’s eggs are implanted in Alison by her husband (who ends up getting hit by a car driven by Hanna and dying). Emily and Alison end up getting back together and having twins. In the series finale Alison proposes to Emily and she gets the happy ending she wanted since she was a teenager.