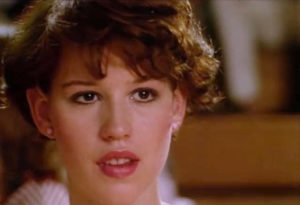 Molly Ringwald as Samantha Baker in Sixteen Candles. Fair Use.

The king of teen movies in the 1980s is without question John Hughes. Between 1984 and 1987 he released six movies: Sixteen Candles, The Breakfast Club, Weird Science, Pretty in Pink, Ferris Bueller’s Day Off and Some Kind of Wonderful. These are all movies still enjoyed by people today (I watch “Ferris Bueller” at least five times a year). While many of the themes in his movies are relevant today, some of his work has not aged well. This was recently discussed by one of the stars of his movies: Molly Ringwald.

In an article for The New Yorker she discusses two of his film: Sixteen Candles and The Breakfast Club. In Sixteen Candles, Samantha struggles with many aspects of teenage life, but especially the fact that her entire family have forgotten about her sixteenth birthday. Her older sister is getting married the following day and Samantha feels overshadowed. This is a common feeling that teenagers have about their siblings (older or younger) and if this were the only plot point, there wouldn’t be any problems. However, one of the subplots of the movie is extremely problematic. Jake is the high school hunk, the guy that Samantha wants to be with. Towards the end of the movie he essentially trades his girlfriend Caroline to Ted (the Geek) in exchange for Samantha’s underwear. At this stage Caroline is so drunk she is practically unconscious. The next morning she wakes up next to Ted and when asked if she enjoyed herself she says: “you know, I have this weird feeling that I did”.

This plot point is troublesome for a number of reasons. The first is that Jake views Caroline is his property and he can trade her for something that he wants. If he cared at all about his girlfriend he would have made sure she got home safely. The second issue is that the Geek gives her still more alcohol and takes pictures with her so he has proof of his “conquest”. Caroline was already drunk and did not want or need any more alcohol; additionally, taking photos without her consent is unacceptable. The third problem stems from Caroline waking up without any memory of what happened, and yet she says that she feels likes she enjoyed herself. We don’t see what happened between Caroline and the Geek, but it is implied they had sex. Even though she doesn’t remember it and she was too drunk to consent, this is never addressed by her or Ted. It implies that this sort of behaviour is acceptable and it simply is not.

I was in college the first time I watched this movie and I found the entire movie problematic (honestly I disliked every character). If I had watched this when I was younger and more impressionable it could have had a much bigger impact on me. With the #MeToo and #TimesUp movements reviewing problematic portrayals of women on TV and in movies has become a popular topic. If you are interested in reading more about this I strongly recommend reading Molly RIngwald’s article where she goes into far more detail on this topic.