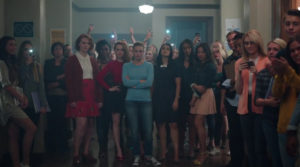 The TV show Riverdale debuted in 2017, and is based on characters from Archie Comics. The show has a mystery element to it with the murder of Jason Blossom in the first episode. While the characters try to figure out who is responsible they also have their own issues to deal with. The main female characters are Betty, Veronica and Cheryl. Betty leads a quiet and studious life, hiding her true feelings for her best friend Archie. Veronica comes to Riverdale from New York after her father is sent to prison and her family loses all their money. The two girls become fast friends, with Betty coming into herself through her friendship with the more outgoing and confident Veronica. Cheryl is the twin sister of Jason and struggles in the wake of his death. She is portrayed as the resident mean girl of Riverdale, however we see her break down a number of times as she struggles to deal with his death.

In “Body Double”, the third episode of season 1, the show deals with the issue of slut-shaming. Veronica goes on a date with one of the school’s football players. He posts pictures of the two making out, which leads to many of the students turning on Veronica and shaming her for it. As the episode progresses we learn the football team has a “shame book” where they keep track of all the girls they date, rating them on looks, etc. The girls of Riverdale unite and confront the team about their behaviour; Betty and Veronica also illicit an apology from the player that posted the pictures of Veronica.

While the show primarily focuses on the mystery of Jason Blossom’s death, this is the first episode to deal with a serious issue. Slut-shaming happens to girls and women all over the world, as does the posting of photos online without consent. This episode shows how damaging it can be to a girl’s confidence and self-esteem. It also showed how powerful girls can be when they work together. Once they realise they’ve all been written about in the “shame book”, they unite to take down the football team. Betty and Veronica also go to extremes to get apology (for the record, I wouldn’t recommend doing what they did). Ultimately, Chuck gets kicked off the football team and Betty and Veronica’s friendship is solidified.