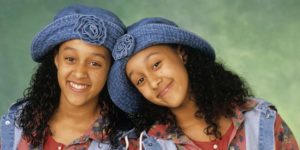 Sister Sister premiered in 1994 and ran for 6 seasons, with a total of 119 episodes. It followed the lives of identical twin sisters, Tia and Tamera, who were separated at birth. One day while both were shopping at the mall they found each other. Throughout the run of the show we saw them navigate high school and college life, all while supporting each other. Earlier this year it was announced that a reboot of the show was being planned.

In season 5 episode 4 (“Show me the Money”), Tia learns that she makes less than her male colleague for doing exactly the same job. While Tia would normally fight this, she is afraid of losing her job so Tamera fights for her. She pretends to be Tia and confronts her manger who proceeds to fire her. It takes a protest in the book shop by Tamera and her friends, but Tia gets her job back and a wage increase.

This episode aired almost 20 years ago, but around the world today women still face this issue. In Europe in 2016, women earned on average 16.2% less than men. In the United States women earn 82 cents for every one dollar that a man does. There are many reasons for this gap, but according to Olivia Mitchell, Director of the pension research council at Wharton School of the University of Pennsylvania, the three main reasons are motherhood, bias from employers, and a lack of negotiating skills. While these are serious obstacles to overcome, progress is being made. Iceland passed a law that made it illegal for companies to pay women less than men for the same work. Women’s Marches all over North America are highlighting the inequalities that women face every day. The Institute for Women’s Policy Research estimates that it will take approximately 40 years for men and women to have pay parity. Hopefully they are wrong.