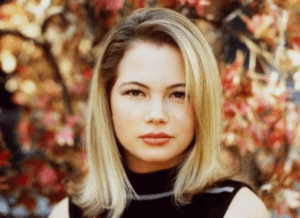 Michelle Williams as Jen Lindley in Dawson’s Creek. Fair Use.

In most stories some version of good versus evil is told. This can take many shapes but in teen dramas it tends to be good girl versus bad girl. We are supposed to root for the good girl who has been wronged but sometimes the back-story of the bad girl is more intriguing than the fight. I want to look at some of the best “bad girls” in teen dramas and discuss how (or if) they changed their ways.

After a fight with her parents, Jen is sent from New York to live in Capeside with her extremely conservative grandmother. In New York she was somewhat of a party girl but when she starts dating Dawson she changes her ways. Once they break up, however, she reverts to her old ways: shoplifting, partying and sleeping around. Throughout much of this time she is forced to deal with Dawson’s harsh judgment of her. She doesn’t match up with his idea of what a woman should be and he is openly critical of many of her choices. It’s not until she realises her own self worth that she starts to succeed. She becomes a cheerleader and focuses more on her school work.

Later she begins to spiral again following the ending of her relationship with Henry. After returning to her partying ways with an old friend, she decides to visit a therapist. It’s during these sessions that we learn that before she came to Capeside she caught her father cheating on her mother with a teenage girl. She moves to Boston to attend college, later transferring to NYU to be closer to her grandmother, who is fighting cancer. In the series finale we learn that Jen has a heart condition and tragically she dies young leaving behind her young daughter.

The transformation of Jen from a party girl to caring mother was not an easy or quick one. It took her confronting the issues that she has with her father before she was truly able to love herself. “Daddy issues” has become a phrase used by people to imply promiscuity in women, however many women do seek out relationships with men to make up for the lack of one with their father. As clichéd as it sounds, it takes Jen learning to love herself before finding someone who loves her too.

The reaction of other characters to her partying ways is troubling in a lot of ways. They judge her far more harshly than they do any male character on the show. In the eyes of the main character, Dawson, women are supposed to be wholesome and pure and not behave the way Jen does. Ultimately Jen stays true to the person that she is and she learns from her mistakes. As she gets older she wants to be a better person and she works hard to become the person she wants to be.