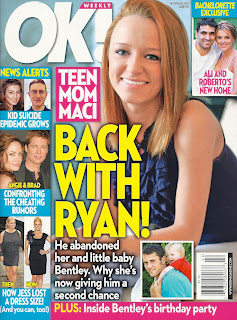 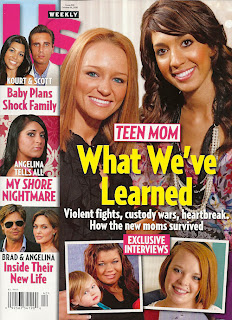 This week’s covers of OK! and Us Weekly

Eighteen years after the first season The Real World, it seems that every subject under the sun has been given the reality treatment.¬† There are shows about wedding dresses, prep school kids and celebrities with drug problems, to name just a few.¬† But in the past year, MTV has built two different shows out of something you might never wish to see as reality TV fodder:¬† teenage pregnancy.
16 and Pregnant, which is in its second season, tracks a different expectant teenager in each of its episodes, chronicling each subject‚Äôs trimesters as well as the relationships with boyfriends and family.¬† A spin-off, Teen Mom, follows the lives of four of the most popular teenagers from 16 and Pregnant as they navigate through motherhood (or in one case, putting a baby up for adoption).
The producers say that they decided to create these shows in order to dispel any myths that teenage parenthood was glamorous or easy.¬† And indeed, many episodes show boyfriends reacting badly to the news and parents trying to tell their teenagers what to do.¬† The financial struggles of being a teen mom and the educational opportunities that must be put on hold are also highlighted.

But, as this article points out, 16 and Pregnant and Teen Mom are not immune to the problems that plague many reality shows.¬† One is the financial incentive of appearing on reality television ‚Äì one source claims that each teenager earns $5,000 per episode and is also given a college scholarship.¬† Some critics say this undermines the financial difficulties of teenage mothering.

Added to this is the fame that comes with being on TV.¬† Lest you think that pregnant teenagers would never become celebrities, consider that fact that every girl featured in Teen Mom has been on the cover of at least one American glossy tabloid.¬† What kind of message are these magazines sending by giving teen moms the same kind of coverage as accomplished actresses?

Finally, there is the aspect of just how ‚Äúreal‚Äù these teenager‚Äôs stories are.¬† Only a few of the girls admit to being on government assistance, and most are white, middle-class and suburban.¬† Where are the stories of receiving welfare checks and having to use food stamps at the grocery store?¬† Why don‚Äôt we see any accounts of what it‚Äôs like to try and raise a baby in poverty-stricken inner cities?

Unfortunately, this is what happens to all types of reality TV shows ‚Äì real life tends to fall by the wayside.
– Miriam Musco
Junior Girl
Girl Museum, Inc.
DONATE NOW