The Backlash against Beard 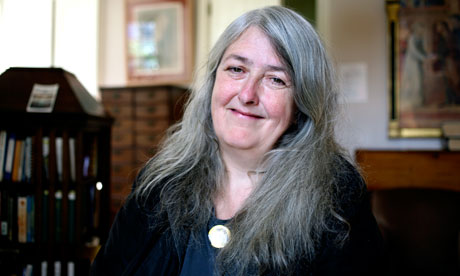 Mary Beard responds to the backlash.
Photograph: Eamonn McCabe
http://www.guardian.co.uk/media/2013/jan/21/mary-beard-suffers-twitter-abuse?CMP=twt_fd&buffer_share=47ad6&utm_source=buffer
Women in the public eye seem to have a very bad deal. They are judged on everything, but most often it seems to be the superficial that takes precedent, and be it their supposed level of attractiveness or fashion choices, they are subject to harsh criticism. A recent example of this is the backlash against Mary Beard following an appearance on the BBC‚Äôs topical debate show Question Time. As a Professor of Classics at the University of Cambridge and presenter of the TV series Meet the Romans with Mary Beard, she is clearly an intelligent woman who has quite rightly and publicly spoken out against her treatment.
During Question Time, Beard made some controversial comments on the subject of immigration which has led to ‚Äòtruly vile‚Äô online abuse. Postings on the Internet include references to Beard‚Äôs pubic hair and the size of her vagina. Additionally, the site ‚ÄòDon‚Äôt Start Me Off‚Äô named her ‚ÄòT**t of the Week.‚Äô There are also images of female genitalia superimposed with Beard‚Äôs face and there is still much, much worse. You can read Mary Beard‚Äôs own response on her blog for The Times Literary Supplement but please beware of strong, sexual and abusive language and graphic images.
Moreover, Beard has also been criticised for her decision to respond to these comments, for not just ‚Äòlaughing them off.‚Äô But then, why should she? These comments are clearly meant to be hurtful, to be offensive and to encourage others to do the same. Beard writes ‚Äòit shows the classic signs of vile playground bullying‚Ä¶ it would be quite enough to put many women off appearing in public, contributing to political debate, especially as all of this comes up on Google.‚Äô It is not okay that people see this ‚Äòbrutal sexism‚Äô as acceptable, nor is it okay that such behaviour is happening. Beard herself said on Radio 4’s Woman‚Äôs Hour, ‚ÄòI don’t want legal regulation, I want people to treat each other decently online,‚Äô and at the end of the day, shouldn‚Äôt we all treat each other with respect and decency, whether online or not?
You can also listen to Mary Beard talking about the abuse on¬†Woman‚Äôs Hour¬†here. Please be aware that the clip contains graphic language.
-Sinny Cheung
Junior Girl
Girl Museum Inc.
DONATE NOW