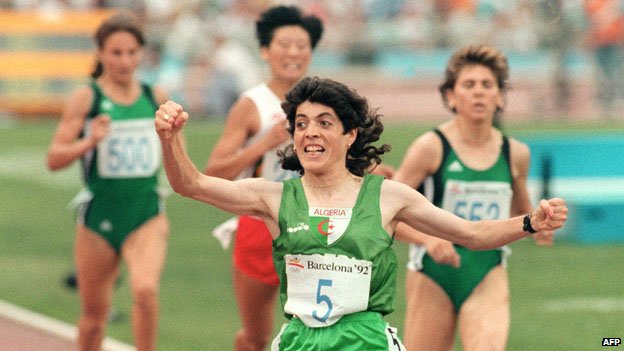 Defying it all to win gold
Photo: AFP
http://www.bbc.co.uk/news/magazine-16962799
Hassiba Boulmerka is a legend in her native country. Two decades earlier this summer, at the 1992 Barcelona Olympics, Boulmerka became the first ever sportsperson to win Olympic gold for Algeria. Her achievement showed women everywhere that they could overcome prejudice to achieve their goals. Algeria at this time was suffering from a rise in Islamist militancy, and some radicals believed that “the racetrack was not the right place for a woman.” ¬†Boulmerka was the fourth of seven children and began running seriously in 1978, when she was ten years old. Her big breakthrough came in Tokyo in 1991 when she won the 1500m at the World Championships and became known as the “Constantine gazelle.”
During the run-up to the Barcelona Olympics, Boulmerka and her family began receiving death threats and were terrorised by extremists who denounced her as a traitor and accused her of being anti-Muslim for wearing shorts and showing too much of her body. She became unable to train in her own country. ‚ÄúIt was simply too risky. I could have been killed at any moment,‚Äù she reveals. Boulmerka only arrived in Barcelona the night before her races and was escorted to the stadium under armed guard. She recalls, “there were police everywhere. In the stadium, in the changing rooms ‚Äì they even came with me to the bathroom!”
On the 8th August 1992, Boulmerka easily bested her competition to win the 1500m gold. “As I crossed the line, I thrust a fist into the air,” Boulmerka recounts. “It was a symbol of victory, of defiance. It was to say: ‘I did it! I won! And now, if you kill me, it’ll be too late. I’ve made history!'” As she stood on the podium to collect gold for herself and her country, Boulmerka fought back the tears. “I tried to hold myself together, to be brave,” she says, “but the tears just started to fall. They were tears of sacrifice, for all the people I loved that I had abandoned for this race.” You can watch a short video of the race here. Following her Olympic success, Boulmerka won a bronze medal at the World Championships in 1993, and gold again in 1995. However, despite her professional achievements, she moved to Cuba in order to escape continued threats to her life. She was eventually able to return to Algeria which she describes as “my life, my roots, my family, my friends.”
Since retiring from running, Boulmerka has become a successful businesswoman and is also an ambassador for female athletes. She was elected a member of the Athletes‚Äô Commission of the International Olympic Committee (IOC) and in 1999, she lobbied the group to put more pressure on governments that discriminate against female athletes. Boulmerka sees her sporting accomplishments as more than just for her country. She says, “it was a triumph for women all over the world to stand up to their enemies. That’s what made me really proud.”
-Sinny Cheung
Junior Girl
Girl Museum Inc.
DONATE NOW