The mass-shootings I have known 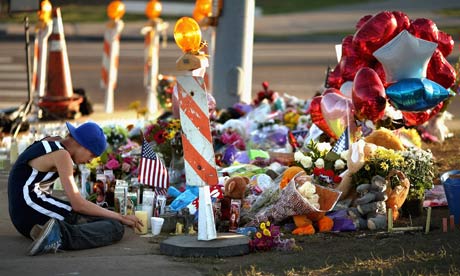 On May 21st, 1998, I was a senior at North Eugene High School in Eugene, Oregon, preparing for graduation. During first period I was watching a movie in French class, having already taken the AP exam. Partway through the period an announcement came over the intercom, saying everyone was to stay in their classrooms until further notice (it wouldn’t be until about a year later that the word “lockdown” became commonplace). Not long after, our principal came onto the intercom and announced that we were free to leave, but that there had been a shooting at Thurston High School in Springfield, approximately 20 minutes away.

Almost exactly three years later, on May 17, 2001, I was a junior at Pacific Lutheran University in Tacoma, Washington. That afternoon I was in my dorm’s lobby, hanging out before going to band rehearsal. Hearing something that sounded like gunshots, we ran for the door, only to be blocked by some (very smart) Resident Assistants. Thwarted, we went to the balcony instead and watched people running toward the always-busy quad between three other dorms. Then we heard the sirens. Two ambulances and a multitude of police cars drove onto campus. One ambulance left within ten minutes, the other much later and slower, well after the helicopters arrived.The Thurston shootings resulted in four deaths (two students and, the day before, the shooter’s parents) and twenty-four injuries. The shooting at PLU resulted in the death of an immensely popular professor and, seven hours later, the shooter, who had turned the gun on himself after placing a suicide note next to his victim.

In a sense, I’m lucky. I wasn’t traumatized by either event–though writing about these events brings up very painful memories–not having personally known the victims at Thurston (though I had friends who did). Because of the quick thinking of the RAs in my dorm, I was lucky enough to not see my piano teacher bleeding to death on the ground, shot multiple times and already brain-dead from the shot to his head. Many of my friends from PLU were not so lucky, having either witnessed the shooting firsthand or helped in the rescue efforts of both the victim and shooter. Even now, over a decade on, we don’t talk about that day. One friend witnessed the event from her dorm room, her home for the majority of the previous four years. Suddenly her home no longer felt safe, and she had no sanctuary on campus. Another friend, trained in CPR, became a de facto first responder. She, along with much of the nursing faculty and students–all on site before the paramedics arrived–had to make the difficult decision to attempt to save the life of the shooter, knowing that nothing could be done for our professor.

As I say, I’m lucky. Though I’m flooded with sad, terrible memories writing this, the pain is not debilitating, and I do not live in fear. But others are not so lucky, and have horrific images enter their mind, unbidden and uncontrollable. For both incidents I was somewhere between girlhood and adulthood; no longer a child, but not yet a true adult. But I was old enough to understand these actions weren’t taken by a healthy person. I was also old enough to understand such actions cannot be avoided by victims or bystanders. I had learned–thankfully–to not live in fear of such things happening, or I would never be able to leave the house.

The children of Sandy Hook Elementary School in Newtown, Connecticut are not so lucky. Twenty of their classmates and six school staff members were killed and two more injured (the shooter killed his mother as well). Even though the killer then turned the gun on himself, some of the children live in fear the shooter will find them. They are not old enough to understand that the shooter was sick. They don’t understand that their school and their friends may have been targeted randomly. In time, they will hopefully heal and grow to understand these things, but in the short term, and possibly longer, they live in fear, and many of them may suffer from post-traumatic stress disorder. What they witnessed and feel is something no child should ever experience.

But Newtown is not the first, and sadly, it is unlikely to be the last. According to Mother Jones, there have been at least 62 mass shootings in America since 1982. The shootings at Columbine High School in 1999 are amongst the most famous (though the phrase “going postal” predates Columbine by approximately a decade), but in 2012 alone there’s been the Oikos University shooting in Oakland, California (April 2nd); the Seattle caf√© shootings (May 30th); the cinema shooting in Aurora, Colorado (July 20th); the Sikh temple shooting in Oak Creek, Wisconsin (August 5th); a workplace shooting in Minneapolis, Minnesota (September 27th); the Clackamas Town Center mall shooting near Portland, Oregon (December 11th); and the Sandy Hook Elementary School shooting in Newtown Connecticut (December 14th).

Though gun control has been at the forefront of conversations about the Sandy Hook Elementary shooting, there is a second issue being discussed: mental health. Mental health is stigmatized, and yet is not uncommon. Though not every shooter is mentally ill, many are, and if we are to realistically deal with violence, gun or otherwise, a discussion of mental needs to be part of that process. For a compelling, if controversial,¬†look at mental health and violence, read “I am Adam Lanza’s Mother.”

There are shootings outside the US, but with the exception of war zones, these occur at a lower rate. There have also been mass murders within the US that didn’t involve firearms (notably 2012’s Ingleside, San Francisco murders) but again, at a lesser rate. Clearly, something needs to change. The specifics of mental health and gun legislation are not things I want to discuss here, but I do want to end with this thought paraphrased from author Joe Hill:

People kill with knives, cars, planes, and guns. One of these, however, has no purpose besides killing.