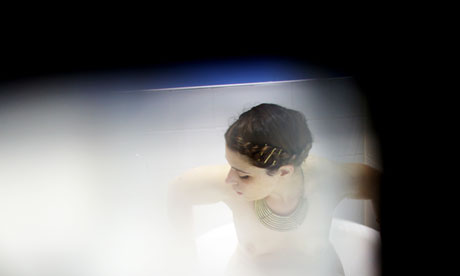 Mark Wallinger’s Diana, on display at the National Gallery, London.
Photograph: Graeme Robertson
http://www.guardian.co.uk/artanddesign/2012/jul/09/mark-wallinger-national-gallery-diana?newsfeed=true
To coincide with the Olympic Games, London is hosting a Cultural Olympiad, celebrating the arts in British collections. The National Gallery is showcasing Titian, an Italian Renaissance artist, in its exhibition Metamorphosis: Titian 2012. Working in collaboration with the Royal Ballet, poets, and contemporary artists, the exhibition examines the theme of change and the influence of the Master’s works on modern artists.
The centrepiece of the exhibition are the three Titian works, Diana and Actaeon, The Death of Actaeon, and Diana and Callisto, which were recently saved for the nation in collaboration with the National Galleries of Scotland. Based on the Roman poet Ovid’s (43BC-17AD) Metamorphoses, the paintings highlight key scenes in the story of the goddess of chastity, Diana. The mortal hunter, Actaeon, was caught spying on the goddess while she was bathing and, as punishment, she transformed him into a stag which was then killed by his own hunting dogs. These paintings have had great influence on artists through the generations and the myth is a stern warning to any would-be voyeur.
Titian’s works are set against contemporary pieces referencing the paintings and it is Mark Wallinger’s modern work for the Metamorphosis which is courting some controversy. Titled Diana, the former Turner Prize winner’s live action installation features six women named Diana who are, like the goddess, bathing naked. In this response to Titian’s work, it is the gallery visitor who is cast as Actaeon: from a darkened room, the viewer can “spy” on the Dianas through little peep holes and sections of opaque glass as they wash their bodies, gaze into the mirror, or recline in an armchair. So is it art or just plain voyeurism?
It is true that if you were caught peeping in at a window in the real world, you’d be punished (although perhaps not quite as severely as Actaeon). We are undoubtedly made to feel like this is an invasion of privacy; however, I feel that Wallinger’s work does more to highlight the issue than condone it. Titian’s Actaeon is severely punished for his crime of gazing at the naked Diana, yet his goddess is on display for all to see. She was commissioned by a man, made by a man, so are we to believe that this work was not meant to be enjoyed by the viewer for its aesthetic qualities? The only difference between this Diana and Titian’s is that Wallinger‚Äôs model is live and in the flesh. In the role of the female nude, women have been viewed and “spied on” by men throughout art history.¬†
Whilst we may not agree with the idea of woman as object, Wallinger’s Diana cuts through the hypocrisy of viewing art. By placing the spectator as a knowing voyeur, it exposes the purpose of some of the greatest works of art. I believe that if we can chose to view the work, and allow parents the option to screen the content for their children, then Wallinger’s Diana is a truly innovative critique of Titian’s masterpieces.
Metamorphosis: Titian 2012 runs from July 11th to 23rd September at the National Gallery, London (admission free).
-Vhari Finch
Junior Girl
Girl Museum Inc.