To the Races: the Kentucky Derby Museum 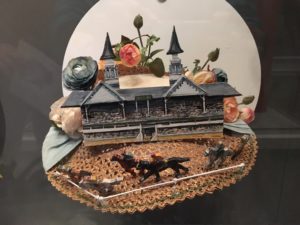 Hat worn to the Kentucky Derby, featuring a diorama of Churchill Downs.

Kentucky has one tradition known the world over: the Kentucky Derby. Held each May at Churchill Downs, three-year-old Thoroughbreds compete to be the fastest to run one and a quarter miles. Despite being “the most exciting two minutes in sports,” you might be thinking: what does this have to do with girls?

In going through the Kentucky Derby Museum, the absence of girls is striking. Nearly all those in the industry have been men, except a few notable female owners and jockeys. Not surprisingly, their stories are absent save for nameplates and a gallery of Derby hats.

Yet that changed when I went on the tour of Churchill Downs included with admission. Though their names are few, three fillies (i.e., female horses) have won the Kentucky Derby. Their names were Winning Colors (1988), Genuine Risk (1980), and Regret (1915).

Though Winning Colors and Genuine Risk competed in all three Triple Crown races (the Derby is the first), I became fascinated by Regret. She was the first of only four horses to win all three Saratoga Race Course events for two-year-olds.

Following her success in the Saratoga series, Regret won her first race as a three-year-old: the Kentucky Derby. Seen by nearly 49,000 people, Regret won the race by two lengths and set a new record for the track of 2:05 ⅖. 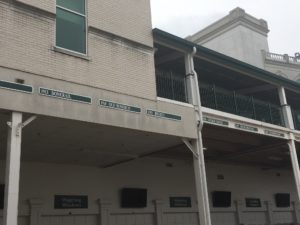 Regret’s name plate along the side of Churchill Downs.

Regret’s win reinvigorated what was a failing race, as the Derby had yet to gain in popularity or standing among Thoroughbred races. Her win brought a surge of newspaper coverage to the Derby, elevating the race into American popular culture. From coast to coast, everyone was talking about the Derby and the filly who conquered it.

Today, the Kentucky Derby is one of the premiere racing events in the world. Thousands gather every May to watch the event, hoping their favorite horse will take home the title and go on to become a Triple Crown winner.

Though I was disappointed that the Kentucky Derby Museum does not represent women or minorities in the racing industry, or even discuss the lack of them, I was surprised to find out that the Derby – as we know it – owes its entire success to a three-year-old filly.

Proof that girls – of any species – are integral to our world.