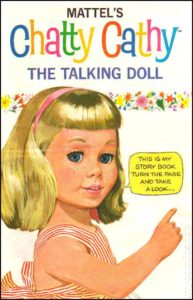 This blog takes a look at just a few of the weird, wacky and wonderful doll creations from over the years. One thing’s for sure – in the doll world, you needed a catchy name, nifty catch-phrases and some neat tricks. But whilst dolls often promoted domesticity, life skills and character building, there were many others that simply belonged in their own strange categories.

Tippy was a battery-operated toy who could perform somersaults and flips. She also had a very catchy theme tune – ‘you can tumble Tippy Tumbles, you can stand on your head, you can tumble slowly forwards or go backwards instead.’ This was a doll that was perhaps aimed at the more athletic types amongst us.

As the name suggested, Chatty Cathy liked to talk and talk she did. When she was first created in 1959, she was programmed to say eleven different things. Chatty Cathy would soon let you know if she was hungry or wanted her hair brushed. This doll was certainly demanding.

One of the more surreal talking dolls. To start with, you had to make the dolls talk by pulling their heads. The Talks-Up had a range of silly phrases, depending on which version you bought, including ‘Oops! I lost my head for a moment’ and ‘here comes my body.’

The doll that could shed real tears. She was part of a range of drink and wet toys that cried and wet herself as you fed her with a bottle. Some of us quickly learnt that Tiny would only stop crying once she was rocked to sleep.

This was another baby doll with life-like functions. Her stand out asset was the fact that she could eat. This meant you had to check her diaper regularly for any mishaps after mealtime. But by being a doll, she at least didn’t leave too much of a smell in the room.

The original Holly Hobbie was an artist who created greetings cards. Soon enough the characters she created for her cards turned into a range of bonnet-clad rag dolls. Alongside Laura Ashley, Holly helped to kickstart the trend for wearing flowery, patchwork frocks. Strawberry Shortcake was a similar creation with similar beginnings, although one we could save for dessert.

As the name suggested – these dolls were flat. They were also proof that dolls did come in different shapes and sizes.

Before the advent of Bratz – this was the doll your parents most likely tried to keep away from you. She had big doe eyes that could change colour and direction. And to be frank, she always did look a little scary.

Girls’ World was a styling head that came with a range of accessories. You could pretend to be a stylist with hair that could really grow! Hopefully, Girls’ World spared real girls from having to endure one too many experimental hair designs.