Trailblazers — The Age of Girls: Alfhild 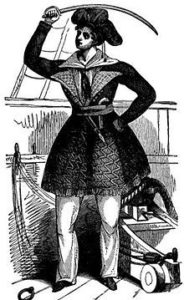 In the late 12th century, Saxo Grammaticus penned a LONG history called Gesta Danorum, aka Deeds of the Danes. Volume seven of this immense history tells the story of Alfhild, a Goth princess who decided to leave her palace and become a pirate instead. This princess turned pirate definitely deserves to be a trailblazer as she left her cushy royal life to rough it out on the high seas just because she wanted to. Now while some historians believe Alfhild is a character from Norse Mythology (and those who do believe she was real can’t decide what century she lived in), I choose to believe Saxo Grammaticus and his wild tales of Alfhild, hoping that this fantastic feminist really did exist!

Alfhild (also known as Alvida, Alwilda or Alvild, just to confuse matters) was the daughter of Siward, King of the Goths who inhabited an island off the southeast corner of Sweden.  Alfhild was a beautiful girl and a princess which, as we all know, is a very dangerous combination. As a princess Alfhild would likely be used to secure an alliance with a powerful family, therefore her virginity needed to be safely guarded. So her father did the logical thing and hid her away, giving her a viper and a snake to rear, intending to use these fearsome guard animals to protect her should anyone wish to kidnap her. Not only that but King Siward declared that if any man tried to enter her bedchamber and failed, he would immediately have his head cut off and impaled on a stake. In other words, you had to be pretty desperate to try for Alfhild’s hand.

Nevertheless many young men attempted to gain entrance to Alfhild’s bedchamber and many young men had their heads chopped off a result. All failed until Prince Alf, son of King Sigar of Denmark (and a very eligible bachelor it would seem) decided he too would attempt to gain entrance to Alfhild’s bedchamber. Alf, like many a fairytale prince, believed the peril of the task only made it nobler and it seemed only to heighten his desire for Alfhild to be his wife. Now Alf, a typical Viking, was used to raiding, pillaging and plundering, and he thought beating a snake and a viper would be no problem. Alf, it turns out, was not just a pretty face, he also was quite clever. He covered his body in blood-stained hide to make the serpents go crazy. He brought with him a pair of tongs (clutching a piece of red-hot steel) and a spear. He waited for the serpents to try and attack him and then rammed the tongs into the throat of the viper when it opened its’ mouth. Simultaneously he thrust the spear into the mouth of the snake as it moved forward. Having slain both of Alfhild’s guardians, feeling pretty pleased with himself, Alf awaited his prize.

Now if that was dramatic enough, this is where Alfhild’s story starts to get really interesting. While King Siward thought Alf would make an excellent son in law, he wanted his daughter to be happy. So Siward had made a stipulation that a suitor who defeated Alfhild’s slippery serpents could only have her hand in marriage if Alfhild decided she wanted him. In Norse culture this was actually commonplace — women had the right to refuse a prospective suitor and they weren’t thought any less of for doing so. That being said, in Norse stories, fair maidens always seemed agreeable to marrying a brave hero.

It turns out Alf didn’t take Alfhild’s fancy, nor did moving to another country to be a princess there, so Alfhild escaped dressed in men’s clothing, joining a band of other women who didn’t want to marry. Alfhild and her band of women fled to the sea where they learned to wield axes and swords and to sail. They soon came across another ship full of male pirates whose captain had just died. Alfhild managed to impress them so much that they agreed to let her be their new captain. Her fleet became very successful and was feared along the Baltic and North Sea coasts.

Eventually Alfhild’s pirate crew became so well known that they came to the attention of the King of Denmark who decided he would send his son, the great warrior Prince Alf (the very same Prince Alf who had tried to marry Alfhild, if you have gotten lost in this tale). Alf and his ships chased Alfhild up and down the coast as she tried to outrun them but eventually she was cornered in the Gulf of Finland. A battle ensued between the two parties and both sides had lots of casualties. Alf managed to go through each ship putting them out of action until he finally got to the lead ship where Alfhild bravely stood wielding her weapon. Soon Alfhild found herself locked in fatal combat with Prince Alf himself. Alfhild was wearing a helmet that concealed who she was — and more importantly that she was a woman! However Alf realised as they were fighting that there was something distinctly feminine about this captain and decided to stand down. When Alfhild removed her helmet Alf stood face to face with his escaped almost-fiancée!

Anyone who doesn’t want a happy ending, stop reading now! Because while Alfhild was fighting Alf, in the moments when she had time to think about these important things, she realised that he was not the silly, weak prince she had thought him to be, but instead was a man with strength and courage equal to her own. He impressed her so much that when he proposed on finding out she was the pirate captain, she said yes! With that, Alfhild quit sailing the seven seas and became Queen of Denmark and was quite happy to spend the rest of her days as a royal. Alf and Alfhild went on to have a daughter who they named Gurith. Nonetheless, although she decided to marry, Saxo Grammaticus lets us known that Alfhild did not cave to traditional Norse society ideals, and instead carried on practicing warfare and ‘men’s’ sports rather than sewing as she should have been.

Alfhild is my 9th century trailblazer for defying the stereotype of a princess and deciding to make a living as a fearsome pirate, with an all-female crew to support her. Not only that but she deserves to be a trailblazer for giving up her pirating ways and marrying Prince Alf — there is courage in admitting that you misjudged someone and going back to being a princess after eschewing that world can’t have been an easy decision. Alfhild, your courage and wild heart does you credit.