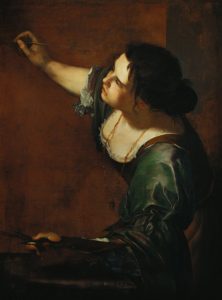 Artemisia Gentileschi ‘Self Portrait as the Allegory of Painting’ 1638.

For my 16th century Trailblazer, I decided to step away from awesome academic girls and look to someone more creative instead. Artemisia Gentileschi (1593-1652) was an Italian Baroque painter who is praised by many as the first ever successful professional female painter – and she didn’t even have to die for it to happen! What’s even cooler about Artemisia is she that she made a name for herself by painting strong mythical and biblical females in positions of power – a rare representation of women in the seventeenth century and one which set her apart from male contemporaries. Artemisia is seen as not just a celebrated female painter, but one with a uniquely female perspective.

But let me back up a little…

Artemisia was the daughter of the illustrious painter Orazio Gentileschi. Surprisingly forward thinking for his time, Orazio trained his daughter in the style of post-Renaissance art, where they were both strongly influenced by Caravagio. Artemisia was a gifted painter, like her father, and at only 17 years old she debuted her first painting, Susanna and the Elders, depicting a biblical story of a woman tormented by two older men after she rejects their advances. This daring work broke Counter-Reformation taboos at a time when female artists were largely confined to still life and portrait painting. But Artemisia wouldn’t be constrained in her art. Artemisia was excluded by art academics for being female and instead had to be privately tutored by her father’s friend, Agostino Tassi. Now here comes the sad part of Artemisia’s tale and a part that she is sadly commonly remembered for; Tassi raped her, and a highly publicized seven-month trial followed. Interestingly, this event makes up the central theme of a controversial French film, Artemisia (1998), directed by Agnes Merlet. Although Tassi was found guilty and jailed for eight months, this event had a negative impact on Artemisia’s reputation and she suffered from snide gossip that branded her a promiscuous woman.

This traumatic event is said to have dramatically affected the subjects of her work and it has been hard for art historians and the public to interpret her works as anything other than symbolic revenge against the man who raped her. This symbolism is particularly apparent in her multiple paintings of the story of Judith seducing and then violently murdering the Assyrian general Holofernes, thus saving the Jewish people. However, art historian Mann prefers to view Artemisia as a champion of strong women rather than a woman obsessed with violence and revenge, and this is also how I will view Artemisia.

Soon after the trial finished, Artemisia’s father arranged a marriage for her and she moved to Florence, where she received generous support and patronage from Cosimo II, grand Duke of Tuscany. In 1616, Artemisia’s talent was officially recognised and she became the first women to be accepted into the Florentine Academic of Fine Arts, aged only 23! Her fearless, feminist painting style gained her much accolade, and she was popular in the royal court and with scholars, such as Galileo. Achieving recognition in the male-dominated sphere of post-Renaissance art was an amazing feat for this trailblazer, especially as she broke many artistic barriers as the first woman to paint major historical and religious scenarios. In Florence, Artemisia had links with the Medici court and painted an Allegory of Inclination (c. 1616) for the series of frescoes honouring the life of Michelangelo in Casa Buonarotti. Her brushes with royalty didn’t end there and in 1638 Artemisia travelled to London, collaborating with her father on the ceiling paintings of the Great Hall in the Queen’s House in Greenwich.

Like many successful modern women, Artemisia could not just focus on her career, but was also highly involved in family life. When Artemisia and her husband separated, she became head of her own household, enjoying a freedom and independence known to few of her female contemporaries, but also carrying a huge responsibility. Yet with two daughters to look after, Artemisia did not quiver, she painted, and she taught her two daughters how to paint. Artemisia taught her daughters that women could be artists too and they both followed in their mother’s footsteps to become painters – I for one think that is really awesome. Like modern career gals, Artemisia and her daughters frequently moved around Italy (and the world!) for career opportunities and to accommodate patronage of the Medici family and King Charles I of England!

Artemisia deserves to be a trailblazer for so many reasons; she was arguably the most important female painter of Early Modern Europe, due to the skill apparent in her works, the originality in her illustrations of traditional subjects and her perseverance as an artist. She became highly successful and was accepted into the male-dominated art world, blazing a trail for her daughters, and all other female artists to follow.