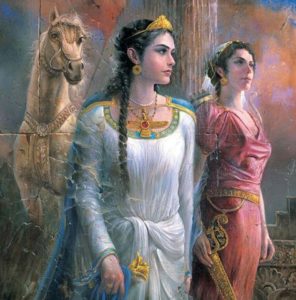 My chosen 7th century trailblazing girl is Apranik, a military commander and resistance leader of the Persian Sasanian Empire, the last pre-Islamic Persian Empire. Apranik is exactly the kind of girl I want to write about on this blog as she was influential and highly valued in her culture, but her story has not spread into popular knowledge. This is partly because of a lack of information about her, some of the most famous characters in history are enigmas as well! What we do know about Aparnik is that she was born with soldiering in her blood – she was the daughter of Piran, a prominent Persian general. Now doubt influenced by her father, Apranik was highly nationalistic and when she finished her education, she immediately went and joined the army.

This is a good point to note that life in the Persian Sasanian Empire was much better for women when compared with today.  Women in Persia were honoured and revered and many held influential positions, such as in the military, state and treasury departments, courthouses and other official ministries. Female emperors ruled over many dynasties in the Persian Empire, many ancient Persian cities and states were ruled by women and some armies were under the exclusive control of female commanders. The ruins of Persepolis also reveal that in Persia men and women had the same profession and they received equal pay – something which is still very much a problem in 21st century. In the Sasanian Empire, gender did not affect anyone’s ability to gain a job. In fact, pregnant women and new mothers actually received higher wages than other workers to show support and appreciation for them!

But back to Apranik: she was born and raised at a point in history when the Sasanian Empire was coming to the end of its 400-year existence, largely due to war with the Byzantine Empire continually weakening it. Once Apranik joined the army as a young woman, she quickly rose from a petty officer to the rank of commander, due to her dedication and skill. When the Sasanian Empire fell to a large-scale invasion by the Islamic Rashidun Caliphate, Apranik took command of major battalion of what was left of the Persian army and mounted an ongoing war of resistance against their conquerors. Although her empire had fallen, Apranik fought with courage and fortitude, refusing to give up until she breathed her last breath. The Rashidun Caliphate were fearsome enemies who used guerrilla tactics; invading and then hiding in the desert before gathering more troops and invading again. Apranik realised that conventional Persian warfare was not working against these tactics so designed ‘hit-and-run’ attacks which would inflict the maximum amount of damage in a short amount of time. Apranik continued these attacks with her loyal soldiers as part of the resistance movement until her death.

Apranik lived by the rules ‘no retreat, no surrender.’ While the Sasanian Empire was never restored, Apranik’s determination and refusal to surrender inspired a wider movement of resistance. She became the face of the resistance movement and her white horse became a famous symbol for freedom (which it still is to this day). Apranik and her soldiers refused to give up the resistance movement against their conquerors and she continued to inspire her people to fight for their freedom, even when it became clear they wouldn’t win their land back.  Apranik’s story became so well known and she became such a symbol for resistance and freedom that the Persians created an expression for her – when a female soldier showed bravery during the resistance movement, other soldiers would call her ‘Apranik’ in acknowledgement of her strength. Through this Apranik inspired a number of other Persian female resistance fighters – the Apraniks.