Trailblazers — The Age of Girls: Elfthryth 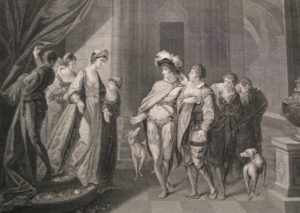 My 10th century Trailblazer is called Elfthryth, or because the Anglo-Saxon’s like to confuse the heck out of those modern folk with only one name — Alfrida or Elfrida.

NB: She should also not be confused with the many other Anglo-Saxon women also called Elfthryth or a name with only one letter difference.

Elfthryth was born c.945 and went on to become an English queen as the second or third wife of King Edgar and the mother of Ethelred the Unready (possibly the worst royal nickname I’ve heard so far). According to chroniclers, Elfthryth should have been named Elfthryth the Evil Stepmother/Witch as she apparently colluded in the murder of both her first husband, an abbot of Ely and her stepson Edward the Martyr, she also committed adultery and practised witchcraft. Perhaps the legendary tale of Elfthryth’s marriage to Edgar foreshadowed the wicked things to come, but then again Anglo-Saxon kingship was a pretty bloody business.

According to William of Malmesbury, the story of this great woman began when the beauty of Elfthryth, daughter of Ordgar, reached the ears of King Edgar. Edgar who was searching for a queen, sent Ethelwald to Elfthryth with orders ‘to offer her marriage [to Edgar] if her beauty were really equal to report.’ She turned out to be just as beautiful as promised and Ethewald, in awe of her beauty, decided to marry her for himself and report to Edgar that she was unsuitable. But, as one might have predicted, Edgar eventually found out about the betrayal of his trusted friend and decided to visit Elfthryth himself. This greatly concerned Ethelwald and so he begged Elfthryth to make herself as unattractive as possible for Edgar’s visit. However, she refused and when Edgar laid eyes on her, he, too, became besotted. As revenge, he killed her husband, Ethelwald, during a hunt and married her himself — a pretty exciting start to a marriage by any account!

So, Elfthryth became queen, displacing Edgar’s first wife (again, Anglo-Saxon kingship promotes the saying all is fair in love and war). In 973, Edgar organised a second coronation, probably to bolster his claim to being ruler of all of Britain. Importantly, Elfthryth was also crowned queen of England. She was, arguably, the first anointed queen of England. Her title was not in name, but it gave her real political power, specifically she was named protector of the nunneries and she took this role seriously. It is Elfthryth’s position as protector of the nunneries and symbol of powerful queenship, as well as her active and unusual involvement in legal cases which marks her out as a trailblazer and significant enough to bring to your attention.

Elfthryth’s most important political contribution during her husband’s reign was as a driving force behind religious reform. Monasticism in England had been largely destroyed during the Viking attacks of the late ninth century and many religious houses were now occupied by secular clerks. But by the mid-tenth century there was a growing Continental movement to introduce the rule of St Benedict to England. Edgar himself strongly believed in reform, as did Elfthryth. Elfthryth was linked politically to Bishop Ethelwold of Winchester and, even before her marriage, she had used her influence with Edgar to persuade him to sell land at Stoke to the Bishop to benefit a reformed house. Early in their marriage, Edgar and Elfthryth jointly commissioned an English translation of the Rule of St Benedict and the queen was prominent at a council held at Winchester in which a famous document, the Regularis Concordia, was produced. The Regularis Concordia  was a statement setting out how monks and nuns were expected to live. It is remarkable for the distinction it allows Elfthryth as queen, providing her with the first specified political role for a queen consort in English history: that of guardian of the nunneries. This role effectively made Elfthryth chief-abbess in England. Again, this was no empty appointment; she took a keen interest in the well-being of several abbeys, and as overseer of Barking Abbey she deposed and later reinstated the abbess when she believed she was not up to scratch. It appears, in fact, that many of the slanderous stories about Elfthryth seem to have originated in nunneries – most likely due to the resentment that her ‘interference’ in their affairs caused. Nonetheless, with her guardianship of female religious houses, Elfthryth provided nuns and abbesses with a voice at court and protected their interests while also ensuring that they adhered to new reforms.

However, more significantly for me than exercising her royal, political and religious power, Elfthryth is an valuable figure and a key trailblazer for her involvement as a forespeca or advocate, in at least seven legal cases, something that is unusual among other near-contemporary queens. Traditional accounts of women’s legal status in Anglo-Saxon times has emphasized their relative independence and their ability to dispose of property and pursue legal disputes without male sponsorship or protection. Nonetheless, while they had both private and public influence a woman’s agency still remained ‘a less vocal presence than the louder agency of her male relations.’ More recently a new emphasis on the dependence of women on male advocates or protectors, referred to as forespecan has resurfaced. There was no professional legal class in England until 13th century so relatives, friends and patrons often helped in legal matters, especially for women; this helped guard their property against confiscation or forfeiture.

Elfthryth is a remarkable woman because she used her noble status to provide advocacy and protection to female litigants in property disputes. Responsible for mediating between the prerogative of the court and the rights of the individual, specifically for those cases involving widows and other unmarried woman, Elfthyrth created an opportunity to renegotiate female legal agency. Evidence survives of her participation in seven lawsuits as well as her intervention as an advocate in three further land transactions. Additionally, each of the courts ended with a negotiated settlement, not a final judgement, which is an added benefit for the women involved. The number of records describing Elfthryth’s active intervention in judicial disputes suggests that legal advocacy played an important role in her understanding of Anglo-Saxon queenship. In addition, just as her husband Edgar sought to expand royal authority by intervening in judicial disputes, legal advocacy may have also offered Elfthryth a way of fixing an official position for the queen under Anglo-Saxon law. Even more amazingly, in all but one of the cases, Elfthryth acted primarily on behalf of female litigants and the charters explicitly name gender as the principal reason behind her intervention. Elfthryth was an early feminist and active supporter of female rights!

Elfthryth’s dubious reputation and potential murdering tendencies do not stop her for being a remarkable woman. She carved a place for herself politically, religiously and legally and supported the rights of woman, especially those less fortunate than herself. Elfthryth’s behaviour crucially demonstrating and gave examples of the possibilities there were for woman to have legal and political power in Anglo-Saxon England. That, in itself, makes her pretty cool and earnt her a position as a trailblazer.