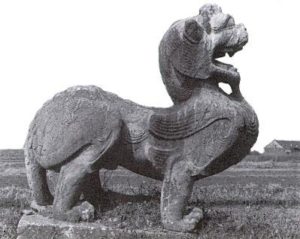 A winged lion near a mausoleum in Nanjing. There are no images of Han Lanying, but this winged lion rests at the mausoleum of one of the Emperors that she interacted with. Photo Credit: Public Domain.

My 5th century trailblazer blog post is going to be short and sweet, mostly because we don’t know much about Han Lanying, but what I do know is enough to cement her into the trailblazing girls’ hall of fame. The first records of Han are from about 454 in the Jiangsu Province of China. Han was a scholar and a writer who died in 493. But as none of Han’s work has survived, we only know about her through references in different histories.

Han Lanying was a very skilled writer. When she was still quite young, she presented her Rhapsody on the Restoration to Emperor Xiaowu and the emperor was so impressed with her work that he invited her enter the palace. Although the sources are not clear in what capacity she entered the palace, I assume it was an academic one. Han so impressed people at court, both with her work and her person, that she maintained her position there throughout several changes of leadership, and even a dynastic change. When Emperor Xiaowu died, Emperor Ming, his brother, kept her on at court, possibly as mistress of ceremony. In this role she would have had to host people at formal events so it was quite a prestigious position.

In 479, there was a change of dynasties in the Jiangsu Province and the Southern Qi dynasty succeeded the Liu Song dynasty. During the reign of the next emperor, Emperor Wu, the kingdom enjoyed relative prosperity and stability and his sons encouraged literature and literary talent. Due to this, Han received the title of Erudite and she was asked to teach the women of the palace. This was a huge honour and demonstrates how highly valued Han and her learnings were. She was seen as a kind of professor and mostly taught script and calligraphy. Due to her elderly status at this point (let’s be serious she was probably only in her 50s) and the breadth of her knowledge, she was known as Lord Han (Han Gong) which was a form of address typically reserved for revered men.

While none of her works survived, there are significant clues to what an amazing, talented and valued women she was. Not only are there records of her positions at court but a special mention is made of Han in the History of the Southern Qi Dynasty. This entry makes her one of the only women of a common background to be mentioned in an official history, outside of chapters on palace women and virtuous women. Additionally, the historian even went to the trouble of recording her full name, which is quite unusual for someone who was not of a high birth.

I chose Han as my trailblazing 5th century girl because she was a person who entered the sacred place of a royal court because of her talent and she maintained her position through lots of changes due to her talent and passion for learning. Han managed to stay above politics and focus on her love of learning and wish to spread her knowledge.