Trailblazers — The Age of Girls: Isabella of Castile 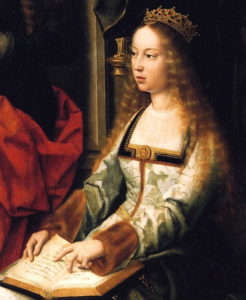 For my 15th century trailblazer, I have chosen a controversial figure: Isabella I of Castile (1451-1504). Isabella is better known as part of the infamous medieval duo Isabella and Ferdinand, rulers of what is now Spain. But Isabella was one of the first European queens to rule in her own right, reigning over Castile from 1474 until her death. There had been an ambiguous and limited tradition of female monarchy on the peninsula, with most acting as regents and none in very recent memory, so Isabella had to set rather than follow precedents. Isabella’s ruling style, while uncompromising and at times intolerant, led her to be a successful monarch and crucially one that did not force her to pretend she was a king to do so.

Isabella was never meant to be queen of Castile.  When her younger brother Alfonso died, Isabella was named heir instead of her half-brother Enrique IV’s daughter Juana (whom he suspected had another father). Yet, when Enrique IV actually died, Castile was left in a bit of a pickle. Aside from the fact that Juana had a real and strong claim to the throne (and supporters in Castile), the general European consensus was to avoid female monarchs whenever possible. Nonetheless, Castile had been dissatisfied with Enrique IV’s rule, specifically his unsuccessful campaigns in Granada and his over-friendliness with religious minorities in Spain. Castile needed a strong and moral monarch to compensate, but was Isabella this person?

Isabella remains a controversial and complex figure. Was she a paragon of late medieval queenship? Was she a Catholic heroine, worthy of sainthood? Or was she a ruthless anti-Semite? In reality, she was a mix of all three and her success as a monarch and her value as a role model lies in the eyes of the beholder.

But for me at least, Isabella deserves to be a trailblazer because from a position of weakness and prejudice, she became one of the most powerful monarchs in Europe. While some of her actions were controversial and at times fanatical, her utter self-belief and thus the strength behind all her actions deserves to be praised. She unified Castile and Aragon through her marriage and consolidated Spain as a key player in Europe politically and economically. Through expelling the Muslims and Jews from Granada, she completed the Reconquista, a religions mission which 30 generations of Christians over 780 years had failed to realise. Though by today’s standards this is not something that should be celebrated, for Christian powers Isabella and Ferdinand had achieved an almost unimaginable feat. As late as 1974, Pope Alexander VI recognised Isabella and Ferdinand as ‘Servants of God’ for this achievement and granted them the titles ‘the Catholic.’ Furthermore, in choosing to finance Christopher Columbus’s 1492 voyage, the New World became the next frontier and the wealth gained from this established Spain as a global power. Isabella also re-organised Castile’s governmental system, brought the crime rate to the lowest it had been in years and solved the problem of the massive debt her brother had left, as well as creating a new effective peripatetic style of ruling. So in short, Isabella did an awful lot of positive things as queen.

However, Ferdinand should not be excluded from this narrative because he is of course very important and Isabella’s handling of her husband is a key reason I believe she deserves to be a trailblazer. Even after clandestinely marrying Ferdinand of Aragon, instead of waiting for the support he could lend her, both as a future king and as a male, Isabella held her own coronation without Ferdinand, moving quickly to consolidate her own power. This move was representative of the way Isabella wanted her marriage to operate. After Enrique died, Isabella and Ferdinand agreed to a series of capitulations, which left most of the administration and power in Castile to Isabella. In others words she got agreement that Ferdinand wouldn’t interfere too much in the way she ran her kingdom, a decision that must have been difficult for Ferdinand, as a male and future king to accept. Isabella held sole proprietorship of Castile and retained control of key appointments of officials. Isabella also wielded substantial control over revenues. Retaining control of her kingdom while married to an influential royal, albeit with a smaller, less powerful kingdom, was a situation that rarely worked out in European history. The likes of Mary I and Elizabeth I are famous for their struggles as female monarchs. Where Elizabeth ultimately decided she couldn’t marry as a regnant queen, Mary I struggled throughout her reign with her husband’s desire for more power and her people’s hatred of her beloved Spaniard. However, Isabella managed to have an effective and equal partnership that actually strengthened both kingdoms. While they ruled their lands together, they also had a lot of independence in their decision making.

What’s more, Isabella was also a pioneer in promoting female education and a loving mother. She strongly believed that women should be educated with the best training in the classics, politics, history, diplomacy and in anything else that would enable a woman to better understand the world she lived in. Contemporaries reported that her daughters could answer any question instantly in Latin, just as any prince could, and Erasmus even praised Catherine of Aragon’s education, claiming she was well instructed, even compared to any male.

Hopefully I have painted a complex portrait of Isabella: A loving mother. A fiercely pious Catholic. A strong warrior. A sound governor. An explorer and financier. While I do not agree with all Isabella did, her strength of mind and character is something to be admired. That she not only successful ruled her own nation, but balanced this with a loving and effective partnership with her husband and neighbouring kingdom of Aragon is frankly outstanding.