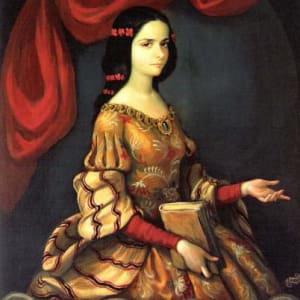 For my 17th century Trailblazer, I’ll be keeping to the theme of awesome academic girls and introducing you to Juana Ines de la Cruz, an incredible scholar who Wang would have been proud to call one of her role models.

Juana was a 17th century nun, scholar and acclaimed writer of the Latin American colonial period and Hispanic Baroque. Although somewhat more obscure than some of my other trailblazers, she has recently become the heroine of Helen Edmundson’s play The Heresy of Love (2015), and in 2016 became the leading women in a Netflix series ‘Juana Ines’ where she was pitched as a powerful, feminist nun involved in a forbidden love affair with a woman.

I can’t comment on the validity of the lesbian love affair but she definitely is an interesting character! Juana was born on 12th November, 1651, in San Miguel Nepantla, Mexico and was always destined to be a scholar. Aged three, she followed her sister to school and begged to be taught to read. As soon as she could, she read everything she could get her hands on! As the years passed, Juana’s thirst for knowledge could not be contained and she became somewhat of a child prodigy. Like many a heroine in the face of sexism, or mischief, she decided she should disguise herself as a boy so that she could go to university. Alas, her parents would not agree to this.

Although the teenager in her was shouting ‘this is not fair!’, Juana’s parents probably made the right call on the whole disguising herself as a boy thing. Instead, she was sent to Mexico City for private tutoring, where she proved she was actually a child genius. She became fluent in Latin after only 20 lessons and began to write poetry in Latin, Spanish and Nahuatl, an Aztec language. Her notoriety grew in Mexico City and she was invited to the vice regal court as a lady of waiting when she was 15. As well as studying, Juana also entertained nobles with her poetry and works of theatre. Eventually the viceroy became intrigued by the apparent prodigy studying under his wife, Vicereine Leonor Carreto, and doubted that a 17-year-old girl could have the intellectual prowess that was claimed. So he decided to set her a test so she could prove herself. 40 leading members of the University of Mexico were invited to put difficult questions to her in fields of law, literature, theology and philosophy, and to have her explain difficult concepts without preparation. You can probably guess what happened — she kicked intellectual butt and everyone was very impressed.

Although all was going well in the viceregal court, in 1667, in order ‘to have no fixed occupation which might curtail [her] freedom to study,’ after rejecting several marriage proposals, she decided to become a nun. Now I don’t know about you, but I think it’s pretty cool that she decided to dedicate herself to a religious order just so she could have some peace and quiet to study. In 1669 she moved to the Convent of San Geronimo in Mexico City, where she remained cloistered for the rest of her life. Juana was lucky that she was able to continue having contact with other scholars and powerful members of court, enjoying the patronage of the viceroy and vicereine of New Spain. She had notable freedom and her patrons published her work in Spain. In return, although cloistered, Juana became the unofficial court poet in 1680s.

After taking her vows, Juana read tirelessly and wrote plays and poetry, often challenging societal values and becoming an early proponent of women’s rights. In particular she’s known for her badass piece ‘Respuesta a Sor Filotea,’ which defends women’s rights to educational access and thus credited her as the first published feminist of the New World. She didn’t limit herself by genre nor secular sources, and wrote dramatic, comedic and scholarly works, highly unusual for a nun of this period. The best thing about Juana’s works is that most included brave and ingenious women.

Yet, Juana’s freedom and favour did not go unchallenged by the church and she was admonished and told to focus on religious studies instead of secular studies. In retaliation, Juana defended the right of all women to attain knowledge and famously wrote (echoing a poet and a Catholic saint), ‘One can perfectly well philosophize while cooking supper.’ I think that’s going to be my new catchphrase.

Juana was not only very talented but she was very brave: set against the social pressures of the time, prevailing attitudes in the church, and the continued influence of the Spanish Inquisition, she wrote works that bordered on the heretical in their focus on freedom, science and the education of women, and for that she deserves to be celebrated!