Trailblazers — The Age of Girls: Khutulun 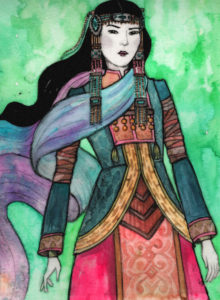 My chosen 13th century trailblazer should be celebrated both for her personal attributes and for the progressive values of her family and tribes people. Khutulun (1260-1306) was the great-great granddaughter of Genghis Khan and a veritable Mongolian warrior in her own right, becoming a legend among her own people at any early age.

Khutulun was the daughter of the Mongolian leader Kaidu, and the niece of Kublai Khan. By 1280, her father had become the most powerful ruler of Central Asia, with his territories stretching from the Central Siberian Plateau all the way to India. In fact, at its height of power, the Mongolian empire was the largest contiguous empire in human history, stretching from China to Europe and the Middle East! Khutulun’s family were certainly didn’t think small.

As nomadic tribespeople, the Mongols were known for their skill in combat and horsemanship – and their women were no different. Mongolian society has to be praised in this area, as women were hugely important and had many rights which could be considered very progressive for their time. Women were crucial in Mongolian society, not just for bearing children and continuing bloodlines, but because they handled the assets and livestock of the tribe, and therefore controlled the economy of their society. While men traditionally hunted and fought other tribes, both men and women were trained to fight and prepared for battle. Due to the tumultuous times in which Khutulun lived, women were necessary in the constant struggles over land and it was not unusual for women to defend their tribes. Women were typically trained as archers, horsewomen and, strangely enough, wrestlers. But Mongolian society also had liberal ideas with regards to marriage. Women were not looked down on in Mongolian society if they chose not to marry – indeed it was their choice. It was also their choice to divorce a husband if they so wished! While this is perhaps indicative of the more fluid nature of Mongol relationships, it still remains pretty astonishing for the 13th century!

But back to our main reason for being here: Khutulun. Khutulun was fabled for being a particularly skilled warrior: she was known for her impressive athleticism in horsemanship, archery and wrestling. Marco Polo, the famous adventurer, made it clear she was no precious princess to be protected:

‘Sometimes she would quit her father’s side, and make a dash at the host of the enemy, and seize some man thereout, as deftly as a hawk pounces on a bird, and carry him to her father; and this she did many a time.’

Her skill was so great that she used it as a way of determining worthy suitors from those who were not. As a princess, Khutulun had a lot of suitors and her parents were desperate for her to marry, however as it was her choice, Khultun decided she would only settle for the best. And the best for her, had to be able to beat her in a wrestling match. To top it off, she even put a price on the match. If she won, the suitor would provide her with 100 horses, if she lost, he would gain her hand. To us, this might seem a highly unusual way of determining who you should marry (follow your heart anyone?), but the Mongols of Khutulun’s clan valued physical ability above all else. They bet on sporting matches continually and if you won, you were considered to be gifted by the gods. But these matches could be savage: there were no girls matches and boys matches, no weight categories or restrictions. Anyone could and did wrestle – and Khutulun was up against men of all ages, weights and sizes. Yet, no man ever managed to beat Khutulun in a wrestling match and she accrued 10,000 horses over her lifetime – now that’s what I call a good business woman! Although Khutulun did eventually marry, she remained undefeated in wrestling, and instead chose her partner for unknown reasons – my sentimental heart hopes it was love.

Khutulun’s legacy stills lives on in the Mongolian wrestling tradition – the outfit they traditionally wear is open-chested – the reason being to show that the wrestler is not a woman, paying respect to the undefeated Khutulun.

Because of her athletic talent and political savvy, Khutulun’s tribe believed that she was blessed by the heavens, so she rode into battle alongside her father, Kaidu, and they never lost. Her father valued her support above all others, fighting against other Mongolian tribes. Her father and his brother, Kublai Khan, fought against each other for 30 years, having conflicting ideas of how the Mongols should live and rule. Throughout this time, Kaidu did not turn to his 14 sons; instead he sought the advice and military expertise of his daughter. Kaidu should be celebrated for not seeing Khutulun through a gendered lens, but instead just seeing the value of his daughter. Kaidu valued his daughter so much he tried to name her his heir before he died – you go, Kaidu! Unfortunately, this was rejected by male relatives who felt they had stronger claims. The bond between father and daughter was so strong that when he died, Khutulun fiercely protected the tomb of her beloved father against robbers and looters. Although Khutulun couldn’t succeed to the throne, she did remain involved in politics after her father’s death by serving as an advisor and general to her brother Orus.

So here I’ve presented my 13th century trailblazer to you: a fearsome and skilled warrior, an adept businesswoman and an independent woman. Khutulun shows us that women are no weaker than men, indeed in the face of something important, Khutulun was stronger than any man who approached her. She also proves to us that we shouldn’t ever settle for marriage, especially if they can’t beat us in a wrestling match!