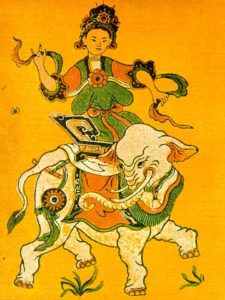 Lady Trieu (or Triệu Thị Trinh), my 3rd century Trailblazer, was a fearsome female Vietnamese warrior who fought for freedom from the patriarchy and her Chinese oppressors. The Vietnam she lived in was troubled: in the year 43 Vietnam was taken over by the Chinese Han Dynasty. Their rule lasted for hundreds of years as the Chinese sought to ‘civilise’ and assimilate the Vietnamese. The Vietnamese people never accepted this and there were many rebellions over the centuries. One of these rebellions was led by the great Lady Trieu.

Lady Trieu was born in 225. She sadly was soon orphaned, left to the care of her brother and his cruel wife. We know little of her early life, but that she grew increasingly angry about her oppression her people faced at the hands of the Chinese, that females faced from men and that she faced from her sister-in-law. When Lady Trieu was 19, it all came to a head and she killed her sister-in-law before fleeing to a nearby mountain. Here, Lady Trieu let free her rebellious spirit and planned her uprising against the Chinese. Lady Trieu spent months in training and rumours started to spread down the mountain and more and more people came to join her. She soon had a thousand warriors amassed in her makeshift training camp, ready to take back their homeland.

Stories tell of how her brother came to the mountain where she was living to persuade her not to rebel (apparently all was forgiven with the whole killing his wife thing too). Her response was pretty badass:

“I only want to ride the wind and walk the waves, slay the big whales of the Eastern sea, clean up frontiers, and save the people from drowning. Why should I imitate others, bow my head, stoop over and be a slave? Why resign myself to menial housework?”

You tell him, Lady Trieu!

She is also quoted saying, “I’d like to ride storms, kill sharks in the open sea, drive out aggressors, reconquer the country, undo the ties of serfdom, and never bend my back to be the concubine of whatever man.”

I don’t know if her brother was won over by her conviction or the mention of killing sharks but he decided to join her rebellion and her inspirational words were written down in history.

Lady Trieu certainly wasn’t all talk: before the age of 21 she fought over 30 battles against the Chinese with her rebel army. At first it is said the Chinese underestimated Lady Trieu because she was a female General, but she quickly became legendary. Legend has it that she was 9 feet tall, had 3 breasts, that she tied her breasts behind her back, had a voice which sounded like a temple bell, and rode into battle on an elephant, wearing golden armor and carrying a sword in each hand. The Chinese had clearly never seen an angry feminist before and made her into some kind of glorious but evil monster (sound familiar anyone?) The rumours that spread about Lady Trieu created a fear which was widespread, with the Chinese claiming it would be easier to fight a tiger than face Lady Trieu in battle, so it all worked in her favour in the end.

Lady Trieu gained the title: ‘The Lady General Clad in Golden Robe,’ which is not a bad nickname as far as nicknames go. Lady Trieu was fearless in battle; she used guerilla tactics and launched sieges at walled cities — something few Vietnamese revolutionaries had ever dared to do. Ultimately her lack of troops and the bribes and promises the Chinese made to her army, let her down and she was defeated. Sadly is said that she drowned herself in a river after a decided defeat at the hands of the Chinese. She was only around the age of 22 or 23.

For such a short life, Lady Trieu made a huge impact on Vietnam. She inspired her people to keep fighting their Chinese oppressors and to never give up their country. Even after she had died, for centuries, she was said to have appeared in the dreams of Vietnamese revolutionaries, spurring them on and offering support and guidance. The Ly dynasty later honoured Lady Trieu in many ways with titles and a temple. Today, Lady Trieu is a national hero in Vietnam. A national holiday honors her bravery and courage, and many streets are named after her in Vietnamese cities (there are Ba Trieu streets in Hue, Ha Noi and Ho Chi Minh City).

However, my favourite story about the impact of Lady Trieu has to be one that comes from shortly after her death. One commander of the Chinese army had been so terrified by such a strong woman that he became terrorised by nightmares of Lady Trieu. It got so bad that he ordered a hundred wooden penises to be carved outside of his headquarters to frighten her away. He is said to have continued to have terrifying nightmares of Lady Trieu even after her death — surprisingly the pensises didn’t frighten her away!

Although this awesome woman in now celebrated in Vietnam, the government of Vietnam tried to wipe Lady Trieu out of public memory in the mid-15th century, when Neo-Confucianism took hold and issued a general “No Girls Allowed” rule in their history books, while the Chinese records do not even mention that she exists. Although the rebellions were acknowledged by the Chinese, there was no mention of Lady Trieu or even of a woman rebel leader. The Chinese only recorded that the Vietnamese people were bribed and that they eventually won. The fact that the Chinese and Vietnamese governments tried to wipe Lady Trieu out of history makes it all the more important to remember her. Too frequently the patriarchy wipes clean the memory of rebellious girls, who were inventors, warriors and leaders. They slide into oblivion until we doubt whether such girls even existed. This encourages us to play it safe and not to question the power structures that rule our lives. By remembering Lady Trieu and other feminists like her, we remember that even from the earliest days, across the world, girls have been fighting for their rights and for what they think is best, and they will never give up. The importance of remembering girls like Lady Trieu cannot be understated – we need role models like her to look up to when we don’t feel strong enough, or brave enough, or simply enough.

So here I am doing my part to make sure that incredible girls like Lady Trieu continue to be remembered and honoured. She was a girl who refused to accept the status quo or the hard hand she was dealt. She fought to liberate both herself and the Vietnamese people, fighting against foreign powers and the patriarchy. She reminds us feminists, and those fighting worthy causes, to never give up even when our causes seem lost. She inspires us, and the people of Vietnam, to do what you believe is right even if its hard and to never ever let your gender stop you from being a total badass.