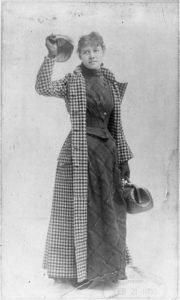 In this column, I’ll be looking at an inspirational girl from every century, starting in the 21st century and working back to the 1st century CE. As a historian and feminist, I thought this was the perfect way to share the stories of awesome historical girls from around the globe. Hopefully you’ll learn about some girls you might not have otherwise heard about, as these Trailblazers deserve to be your next role models!

There were so many contenders for my 19th century trailblazing girl, it was nearly impossible to pick just one to write about! However, when I read this quote by Nellie Bly, I knew she was the girl for me:

That quote sums Nellie up in a nutshell.

Nellie Bly (1864-1922) was an American journalist who lived in the 19th and 20th centuries. It seems silly in some ways to call her a journalist, for she was much more than that, but journalism was her chosen profession. Nellie’s career started quite by accident when she wrote a scathing letter to the editor of the Pittsburgh Dispatch in response to a misogynistic column titled ‘What Girls Are Good For’ (apparently only producing heirs and doing housework, in case you were wondering). The editor was so impressed by her passion that he offered her the opportunity to write a piece for the newspaper, which then turned into a full-time job!

However, her new boss quickly tried to fob off fluffy women’s articles on her and Nellie was just not interested. Instead she invented a new type of journalism: investigative journalism. The only way to describe Nellie’s writing really is ballsy. She wrote hard-hitting stories on female factory workers, the inherent disadvantages of being a woman in divorce proceedings and travelled to Mexico to be a foreign correspondent. At age 21, she spent 6 months reporting on the lives and customs of Mexican people. She was so bold in her writing, protesting the Mexican dictatorship and the imprisonment of a local journalist on the grounds of freedom of speech, that she was threatened with arrest and had to flee the country.

However, after tiring of the Pittsburgh Dispatch’s attempts to get her to write pieces on flowers and fashion, Nellie quit her job and moved to New York City. Four months later, she was penniless but still confident. She talked her way into the office of New York World and persuaded them to let her go undercover in a mental asylum. Not knowing if she would even be able to get out of the asylum, Nellie risked it all by pretending to be mentally ill and it paid off!

Her report, Ten Days in a Mad-House, later came out as a book (and is now a movie!) Nellie’s scathing expose on the horrific conditions and abuse of patients in the women’s asylum led to reforms and funding for the treatment of mentally ill people. Following this, the New York Evening Journal called her ‘the best reporter in America’; not bad for a girl who had been penniless just months before.

In 1888, Nellie put forward her most radical idea to date. She wanted to turn the book Around the World in Eighty Days into reality. Not only that but she had to be the one to do it. She was immediately shot down by her editor who told her ‘no one but a man can do this,’ provocatively stating that she would need a protector and would carry too much baggage. Nellie’s response, as with everything, was fearless. “Very well,” she replied, “Start the man, and I’ll start the same day for some other newspaper and beat him.” After being refused for a year, with two days notice, Nellie boarded the Augusta Victoria and began her 40,070km/24898 mile journey across the world. Nellie travelled by train, steamship, rickshaw, horse and donkey, and most of the time she was completely alone. Nellie accomplished her journey in 72 days, beating her personal challenge of 75 days and unknowingly beating out her competitor, Elizabeth Bisland of Cosmopolitan magazine.

It doesn’t get much more exciting than a young woman travelling around the world, unaccompanied, trying to beat the record of a fictional journey. But Nellie was not just a badass journalist. She was also an inventor, receiving a US patent for a novel milk can and for a stacking garbage can. She was also for a time one of the leading women industrialists in the US. There seemed to be nothing Nellie could not do.

It is Nellie’s fearlessness and refusal to allow her gender to stop her from doing anything that makes her such an inspiration. Can’t was not a word in Nellie’s vocabulary. She saw a challenge and she surmounted it, never letting fear or judgement get in the way of what she wanted to do. She also had total confidence in her own worth as a woman and that is something all women should learn.