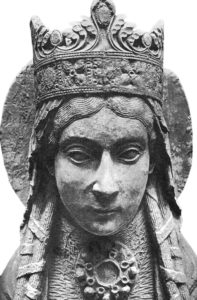 Saint Clotilde (c. 470-545) is my chosen 5th century trailblazer. Knowing that Clotilde was made a saint will already tip you off that she was a pretty incredible person. I hope to convince you in this blog that she deserved her sainthood and is an extremely important figure in the history of France and the Holy Roman Empire.

Saint Clotilde is a little-known figure to most people which is astonishing really considering the enormous change her actions and faith had on Europe. Clotilde was a princess of the kingdom of Burgundy in the late 5th and 6th centuries. After a tumultuous upbringing which saw her orphaned, Clotilde married Clovis I, King of the Franks, in 492. Their marriage founded the Merovingian dynasty which ruled for over 200 years. Together Clotilde and Clovis united all the Frankish tribes under one ruler, forever changing the way of ruling this area. Power switched from being with a group of royal chieftains to rule by a single king who then passed his power onto his heirs.

Clotilde is famous for convincing her husband to convert to Christianity. Clotilde was brought up as a Catholic, while her husband was an established pagan. Upon marrying Clovis Clotilde made it her mission to not rest until he had converted to Christianity, but this was no easy task. According to Gregory of Tours’ Historia Francorum, not only did Clovis initially refuse to convert but he also obstinately refused to let Clotilde baptise their first child. Clotilde however was so strong in her faith that she secretly baptised their first child, but he tragically died soon afterwards. Clovis blamed this on the baptism and became even more adamant that he wouldn’t convert, banning Clotilde from baptising any further children of theirs. Yet when their second child was born, Clotilde baptised him without Clovis’ knowledge or consent, regardless of the repercussions. This was a brave and dangerous move, but thankfully her son Chlodomer, although he fell ill soon after the baptism, recovered.

Despite Clovis’ resistance to Christianity, Clotilde was tireless in urging her husband to renounce his idols and acknowledge the God that she believed was true – the Christian God.  But her persistence eventually paid off! Clovis became a Catholic following the Battle of Tolbiac: little is known about the battle except that Clovis was losing the battle (and faith in his army), so he called upon the God of his wife and asked for helped.

Gregory of Tours records Clovis’s prayer in chapter II of the History of the Franks: ‘O Jesus Christ, you who as Clotilde tells me are the son of the Living God, you who give succour to those who are in danger, and victory to those accorded who hope in Thee, I seek the glory of devotion with your assistance: If you give me victory over these enemies, and if I experience the miracles that the people committed to your name say they have had, I believe in you, and I will be baptized in your name. Indeed, I invoked my gods, and, as I am experiencing, they failed to help me, which makes me believe that they are endowed with no powers, that they do not come to the aid of those who serve. It’s to you I cry now, I want to believe in you if only I may be saved from my opponents.’

Although it is unlikely someone would have had the time or foresight to write down this prayer as it was happening, we can assume that Clovis said something along those lines. Either way, at the words of the prayer, the Alemanni (the enemies of the Franks) began to flee, as their leader had been killed. Soon afterwards the battle was won and Clovis fulfilled his promise and readily converted to Catholicism.

Clotilde became a saint because of her conversion of her husband’s to Christianity. It is because of her continually preaching to her husband (which normally is considering a bad thing!) that she is credited with getting him to convert. You might think that this conversion was no big deal, but Clovis’ conversion to Catholicism changed the religious and therefore political map of Europe forever. Clovis’ baptism led to the widespread conversion of the Frankish people, which led to religious unification across what is now modern-day France, Belgium and Germany. This seemingly small act of a baptism, of which thousands of people undertake each day across the world, also led to Charlemagne’s alliance with the Pope three centuries later and in the 10th century, under the rule of Otto I the Great, to the birth of the Holy Roman Empire. Due to Clovis’ conversion to Catholicism, and Clotilde’s instrumental role in this, she is credited with spreading Christianity to the Western World. So yeah, I think Clotilde probably does deserve to be a saint after all!

After Clovis’ death in 511 Clotilde played an important political role in their kingdom, albeit not always a successful one. On Clovis’ death, their three sons and a fourth, Theuderic, Clovis’ by a previous wife, inherited parts of the kingdom. Clotilde persuaded them to go to war against her cousin, King Sigismund of Burgundy, whose father had murdered her parents. However, this led to further deaths of her children and war amongst the whole family. Not wanting to be a part of this any longer, Clotilde dedicated herself to a saintly life, retiring to the Abbey of St. Martin at Tours. She spent her last years building churches and monasteries and was known for her almsgiving and her generosity to the church.

While this trailblazer is often depicted presiding over the baptism of Clovis, a monumental moment without a doubt, I want to remember Clotilde as a zealous, dedicated, passionate and brave woman. She did not know that the baptism of her husband would alter the course of European history for good, but she knew she had to make her husband Catholic no matter how many years it took, and I can admire that dedication greatly. So, here’s to Clotilde the often forgotten spreader of Christianity to the western world.