Trailblazers — The Age of Girls: The Trung Sisters 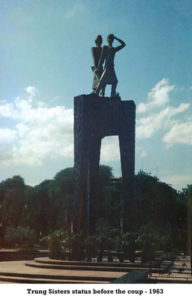 I chose a rather special 1st century trailblazer to finish off my column, Trailblazers: The Age of Girls, or rather, I didn’t just pick one person — I chose two! These two rebel sisters are pretty much a package deal though, so I don’t think I cheated too much.

The Trung sisters were Vietnamese military leaders, who lived from about 12 – 43 AD. They ruled for roughly three years after they bravely rebelled against the first Chinese domination of Vietnam (sadly, the first of many!) and drove the Han out of Vietnam in 40 AD. The bravery of these two sisters is documented in two separate sources: 5th century Book of the Later Han by the Chinese writer Fan Ye, which covers the Han dynasty from 6 – 189 AD, and the Vietnamese text Dai Viet Su ky toan thu by Ngo Si Lien, which was finished in 15th century. These sources vary slightly in their details, but it is possible to piece together the inspiring story of the Trung sisters.

According to Vietnamese sources, the Trung sisters were born in a rural Vietnamese village, into a military family. Due to this, the sisters were brought up learning martial arts and studying the art of warfare. As they grew, they witnessed the suffering of their people and the cruelty of their Chinese overlords — especially the Chinese governor To Dihn. During this time there was regularly unrest amongst the Vietnamese, protesting against taxes and the assimilation of Chinese culture and religion.

Over time, the Chinese Han grew more and more strict, enforcing a policy of cultural assimilation. Trung Trac’s husband Thi Sach was executed by the Han for taking a stand against these harsh measures, to try and cow the Vietnamese into submission. However his death had the opposite effect; instead of subduing his wife, Trung Trac, it gave her fire (especially after she was also punished by To Dihn) and she chose to take on his cause — to free Vietnam from the Chinese. In 40 AD, Trung Trac and her sister Trung Nhi, successful drove the Chinese out of their village and assembled a large army — mostly made up of women! They had approximately 80,000 supporters, with 36 female generals, including their mother! Within months, the Trung sisters and their supporters had liberated about 65 cities from the Chinese and proclaimed themselves queens – To Dihn and other Han officials had to flee the areas. As rulers, they abolished the Chinese tax, and tried to restore traditional Vietnamese values to their kingdom. According to one source, the Trung sisters established a nation and their own queenship “as easily as their turning over their hands.” Their rebellion awakened in the Vietnamese a spirit of independence and a wish to fight for their own land, for their own country.

While they ruled, The Trung sisters managed to resist any further attacks from the Han for the next three years.

The Han, uneasy with the situation in the borders of Vietnam, started to stockpile food supplies, and prepare the cities for war. Ma Yuan — presumably some badass military guy — was asked to lead the invasions. The Vietnamese tale of the big battle between Trung Trac and Ma Yuan is sadly anticlimactic. Apparently the Trung sisters, realising that Ma Yuan’s army was much larger and better trained than their own, withdrew to the Jin River. At this point, her followers, believing a woman couldn’t be victorious in battle, scattered and their rule ended. Another, more amusing tale, claims that the Chinese soldiers took off their clothes and the Trung army, mostly made up of women, were so embarrassed they fled! If this is true, the Chinese truly had ingenious war tactics!

Either way, it was at this battle that the Trung sisters were defeated and sadly killed. There are various stories as to how they died: some say Ma Yuan killed them in battle or decapitated them afterwards, some report that they drowned themselves in the river to avoid capture, and one legendary account suggests that they vanished into the sky! Tragically, however they died, these brazen rebels’ fight against the Chinese broke down after they were gone.

The Trung sisters still, almost 2000 years later, remain powerful symbols of Vietnamese resistance and freedom. They are remembered for their leadership, fighting skills, and courage, as well as their dedication to their beloved country. Often mentioned alongside 3rd century Vietnamese rebel Lady Trieu, there are many temples, streets and schools dedicated to them, along with a yearly holiday in February to celebrate their courage. There is conflicting evidence on whether the Vietnamese people historically supported female leaders and a matriarchal society, but many people believe that they were evidence of the respected position and relative freedom of women in Vietnamese society, especially when compared to the societies of China and India. Nonetheless, the abundance of celebrated female rebels in Vietnam is indicative at least of their importance in the story of Vietnamese independence.

Many Vietnamese people say that if the Trung sisters had not fought against the Han dynasty, there would be no Vietnamese nation today. Although I certainly do not know enough about Vietnam to make a judgement on this, they are clearly revered and important women, who inspire the nation — both men and women — to fight for independence and freedom, and everything that is good. I hope the Trung sisters will continue to inspire Vietnam and the world for at least another 2000 years!