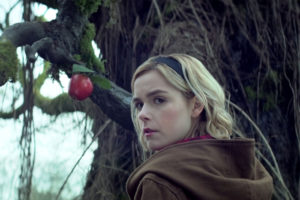 Happy Halloween, everybody! As it is Halloween, I thought it was only fitting to write about a beloved childhood favorite of mine. And since the powers that be took Practical Magic off of Netflix and I didn’t feel like watching Kiki’s Delivery Service (but I still love it!), I decided to watch something new — Netflix’s Chilling Adventures of Sabrina, Chapter One: October Country.

Sabrina Spellman will have a special place in my heart always and forever. I grew up watching Melissa Joan Hart’s Sabrina the Teenage Witch reruns after school with my sister, and we both love the series. I have to admit, I was a little uncertain of talk about a reboot if only because the ‘90s version is so close to my heart, but all of that uncertainty faded away shortly after starting the first episode. I have a lot of thoughts and feelings, so let’s dive in!

Sabrina Spellman (Mad Men’s Kiernan Shipka) is your everyday teenage girl — she wants to smash the patriarchy, is concerned about intersectionality and wants to form a feminist club at school (WICCA, short for Women’s Intersectional Cultural and Creative Association) to help protect her friend, Suzie, from getting harassed by the football team. She also just happens to be half-witch, half-mortal, and in the midst of preparing for her 16th birthday/Dark Baptism. Instead of a fun party to look forward to, as part of her Dark Baptism, Sabrina has to cut all ties to the mortal world and leave her boyfriend, Harvey, and friends, to attend the Unseen Academy of Dark Arts, a boarding school for witches.

Sabrina is having doubts about leaving everything she’s ever known to pal around with the Devil and maintain her magical powers, and wants to find out more about the Dark Baptism ritual. In one conversation with her aunts, she says that she wants to learn all she can about the Dark Baptism so she can make an educated choice — I cheered!! Sidenote: every time someone says “the Dark Lord” I always think of Voldemort. Moving on…the Dark Lord really wants Sabrina to complete her Dark Baptism, so he sends one of his minions to kill and possess Sabrina’s favorite teacher, Miss Wardwell (played by a delightfully delicious Michelle Gomez). The possessed Miss Wardwell spends the episode — I am assuming the rest of the series — trying to bring Sabrina over to the side of night.

Sabrina’s aunts are absolutely delightful as well, and I can’t wait to see more of them throughout the series. Hilda is very nurturing, loving and the “good cop” to Zelda’s serious and strict “bad cop” act. Throughout the episode, Sabrina is struggling with her decision and is trying to get all the information possible. Her cousin, Ambrose — who is 75 years old, but looks like a teenager, and is under house arrest for an unknown reason — suggests she go apple picking and find an apple from the oldest tree to aid in her decision. She finds the apple, bites into it and sees a horrific vision and then goes home to share her decision with the Spellman aunts. The Spellmans have been visited by Father Blackwood, the High Priest of the Church of Night, who is there to convince Sabrina to go through with the ritual.

Having only watched one episode, I really am loving this series so far, and I have no doubt that by the time this posts on Wednesday, I will have finished the series! I hope the remaining episodes can answer some, if not all of my questions/comments, including:

Sound off in the comments below — what do you think of the Sabrina reboot?