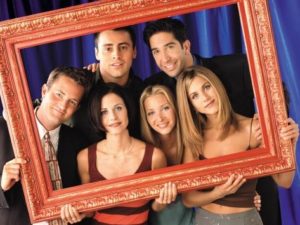 Recently I have been job hunting, which has inevitably meant procrastinating by binging on Netflix. My series of choice has been an old favourite — Friends. The One with The Hypnosis Tapes, season 3 episode 18 of the series, aired in 1997. Whilst re-watching this, the shift in the cultural attitudes has started to appear.

This episode sees Chandler hypnotise himself by listening to a cassette tape (yep, definitely the ‘90s), in an attempt to give up smoking after his friends are exasperated by his habit. When the tape plays at night, Chandler is told that “[he is] a strong confident woman who doesn’t need to smoke.” For the rest of the episode, Chandler adopts typical female characteristics. He is more sensitive, engages in gossip and uses lip balm. I can’t help but feel that this stereotyped portrayal of women is problematic.

Monica rejects a regular, Pete Becker, at the diner she works at. She turns him down for a date, yet he persists. He then leaves Monica a $25,000 tip which she assumes is fake. Later on, Chandler realises that Pete is in fact a multi-millionaire and that the cheque is real. Monica confronts Pete and he manages to persuade her to go on a date, and takes her to Italy for a romantic getaway. Is this a funny meet-cute or does this send out the message to young girls that they can be bought?

Frank Jr., Phoebe’s younger brother visits New York to share in his news that he is getting married. To Phoebe’s dismay, Frank’s fiancée, Alison, is a much-older woman. Phoebe persuades Alison to break off the engagement and Frank is distraught. Feeling guilty, Phoebe confesses that it is her fault the two are no longer together. Phoebe brings Alison to the apartment to explain her decision to cancel the wedding to Frank. When the pair meet again, they almost immediately reunite romantically. Is the age gap between the couple a legitimate issue?

Although Friends is a much-beloved comedy series from the ‘90s, it is evident that societal values have shifted pertaining to girls. The typically stereotyped archetypes that the female characters are portrayed in at certain times are now outdated and generally more inclusive characters are shown in sitcoms of today. I would not write-off this series. It is definitely foremost a comedy and is also a product of its time. That being said, I also would not advocate the series for young girls of today.