TV Review: Violet Baudelaire in A Series of Unfortunate Events 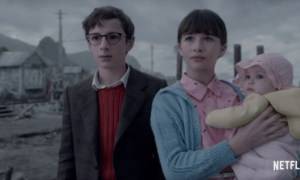 Still from A Series of Unfortunate Events. Credit: Netflix. Fair Use.

A Series of Unfortunate Events, was first written as a literary series by Lemony Snicket in 1999. Although adapted into a film in 2004, it was later developed by Netflix in 2017, gaining much more success.

In this review, I will be discussing the character of Violet Baudelaire, and her most recent representation in the Netflix series by Malina Weissman.

The story follows the three Baudelaire children, Violet, Klaus and Sunny, who become orphans after their parents die in a mysterious house fire. They are sent to live with their distant relative Count Olaf who they have never met or heard of. Count Olaf then makes it his goal to steal the Baudelaire fortune, by any means possible.

After having seen the original film, I was unsure at how Netflix would represent Violet and whether she would differ from the previous film and original books. Luckily, it has proven a refreshing and exciting take on the Baudelaire orphans. Violet as triumphed throughout series one and two, as a strong and intelligent female character.

Violet is around fourteen-years-old when the series begins and is the oldest of the three siblings. Yet, she does not assume any authoritative role and the siblings often work together as a team.

Netflix has definitely represented that Violet has more of a close friendship and team relationship with her siblings, rather than a maternal role. It is important that they often work together and pull their talents to evade Count Olaf, played by Neil Patrick Harris.

One of the great things about Violet in this series, is that she is such a realistic character. In series one, Violet’s talents for inventing, with her signature move of tying her hair up with a ribbon, to signify a plan or an idea, highlight her aptitude for logic and knowledge. It shows the viewer that Violet, although in unusual (and unfortunate) circumstances, is a very real aspiration for young girls. She is as smart, inventive and dedicated to her siblings.

In the second series, the viewer sees Violet develop a love interest with Duncan Quagmire. But, this does not take over the plot or get in the way of her independence. This is actually quite a minor plot and although the viewer is aware of it, it is important Violet was able to maintain her individuality and her wider goal of ensuring she and her siblings were safe.

Netflix have succeeded in continuing to represent Violet Baudelaire as a strong and intelligent young girl and a great role model for other young girls.