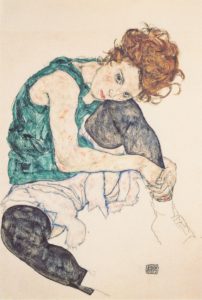 Recently, some of Girl Museum’s senior staff got into a discussion centered around an article by Jane Kallir on Egon Schiele, an early 20th century Austrian Expressionist. In January, Head Girl Ashley E Remer discussed the #MeToo movement in the art world. Though that post focused on the controversy surrounding a Balthus painting at the Metropolitan Museum of Art, she touched on Schiele as well. Schiele’s birthday was June 12th, and 2018 is the 100th anniversary of Schiele’s death, so there are currently a lot of exhibitions featuring Schiele, and an equal number of articles discussing him. Controversy surrounds Schiele; his use of young (underage, by current standards) girls for models, who were usually portrayed in highly provocative, nude (or semi-nude) poses has made him a lightning rod due to the #MeToo movement.

Kallir is the world’s foremost expert on Schiele: she published Egon Schiele: The Complete Works. She also provides expert opinions on possible Schiele works not currently in the catalogue. No one at Girl Museum disputes her expertise, though some of us do take issue with her arguments and conclusions. In particular, Ashley Remer, our founder, and our Program Developer, Tiffany Rhoades, got into a discussion of Kallir’s article, entitled “Egon Schiele was not a sex offender”. In it, Kallir explains that today’s standards of morality and decency are very different from those of Schiele’s lifetime. She writes

Schiele’s sexual escapades were fully in keeping with the norm for a bourgeois young man. Because males were not considered suitable marriage partners until they had established themselves professionally, they were expected to spend their early 20s consorting with prostitutes and lower-class lovers. Most of these prostitutes were minors; the age of consent in fin-de-siècle Austria was 14.

Kallir also points out people are uncomfortable with Schiele’s work because he “subverted established convention.” In his methods of posing his models, she believes Schiele gave the women he portrayed “an uncommon degree of sexual agency.”  Kallir ends her article by saying, “To brand Schiele a sex offender is not only wrong; it ignores essential historical context and forecloses necessary dialogue.”

To insert myself into this debate, I would simply like to say that these sort of discussions are why I love working with Girl Museum and all of my wonderful colleagues. Critical discussions like this stretch our minds by presenting differing viewpoints and opinions, without animosity or rancor. As Editor-in-Chief, I believe this sort of debate is priceless, and a core part of our mission here at Girl Museum. As such, I asked both Ashley and Tiffany if I could share their thoughts with the wider world. I’m very glad they agreed. 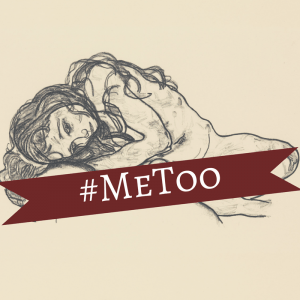 I am not an art person, but looking at it from a historian’s perspective, I can slightly see [Kallir’s] point. We do have to consider the times that artists lived in, and that our own moral standards are vastly different from their times. However, that isn’t to say they are not sex offenders in our definition – it is merely a basis for saying that “yes, they did things we now find morally reprehensible and wrong, things that violate a woman’s inherent human rights; but if we were to judge them in their time and place, we would lose.” And that is because #MeToo is the (so far) climax of years – albeit, centuries – of societal norms debating and arguing over the “rightful place” of females.

To merely condemn all artists, historical figures, etc. who have a story that does not align with our values is akin to simply taking down Confederate monuments without any real discussion of the narrative and norms that placed them there to begin with.

Should we take such monuments and artists off their pedestals? Yes. Should we condemn them? Perhaps. Should we forget them and assign them the role of countless women forgotten in the annals of history? No.

To simply condemn and forget is to betray ourselves. Art – and even historical narrative – has always been a way for us to reflect, debate, deliberate, and even challenge our own consciences. It forces us to reckon with what we have inherited, to weigh it for ourselves, and to determine if we will rise or be doomed to repeat our past crimes.

In remembering the Holocaust, we also remember Hitler. We debate him, reflect on him, and question his society and how he was formed by it.

Can we not do the same with artists? Can we put labels on that do not condemn, but merely present the facts and ask the audience to judge?

Is Egon a perpetrator of violence, or was he using violence to spark art that would change people and society? Did he use violence purposely, or was he simply a product of his time who did not know there was another way to treat women? Does his art show women subject to violent interpretations, or is it their inner violence and confrontational poses that spark violence in us, the viewer?

Even more so, was Egon’s attitudes towards women his fault or society’s? Egon supposedly had incestuous relations with his sister, and yet there are hints that his father might have been violent; could that night merely have been an escape? Even more to consider is the Belle Époque society in which he lived – one that glamorized sexuality, inherited the centuries long tradition of young girls (mostly of no status) becoming prostitution/models in an attempt to become wealthy (and independent) mistresses, and that fostered both art and a sense of fluidity in morality. Did Egon’s earlier, perhaps violent or traumatizing experiences, with his father (and his father’s syphilis, which is known to cause a host of disfigurative and dementia-like symptoms) combine with this glamorous society that pursued art unapologetically to produce the Egon we know today?

Or was he truly a pedophile? Does it not matter that the age of consent in Austria was only 14 at the time? Does that fault lie with Egon or the Austrian government?

Cases like this come down to a matter of opinion.

Was Egon a sex offender? By our standards, hell yes.

By his time and place? Somewhat, but never convicted. Which means that more than anything, he was an artist who angered people. Whose life and work evokes the very emotions he sought to inspire. Who pushed boundaries in ways we will never fully understand and, at times, will condemn.

We should mention he might have been a sex offender. It should be in discussions of his works and put in exhibitions. Not simply because of #MeToo, but because to ignore the controversies of his life is to ignore the meaning of his art, the legacy he has left us, and the questions that every one of his drawings will internally raise. But, most importantly, because giving voice to these darkest, violent, morally questionable mysteries is to give voice to the women – his lovers, models, and perhaps even victims – who will never be able to tell us the real story.

Use that how you will. It’s my take on what little I know of Schiele and art and history.

But never be afraid to just put your voice out there. Now is your time.