This is the second part of our two responses to Jane Kallir’s article, “Egon Schiele was not a sex offender”. The first part, from Program Developer Tiffany Rhoades, can be found here. While Tiffany looked primarily at the historical context and ramifications, Head Girl Ashley E Remer looks at the social and moral aspects of the art world. 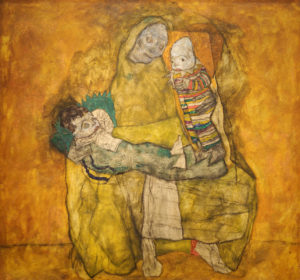 Who makes the laws of consent?

Men–who know they need a law to stop themselves from doing things they know are wrong.

Jane Kallir defends Egon Schiele with the title “Egon Schiele was not a sex offender”. She claims, “Schiele’s relationships with women are difficult for us to judge, not only because no living witnesses survive, but also because present-day standards are so very different from those that prevailed in early 20th-century Austria.” We are talking one hundred years ago, not 5,000 years ago. We are the same people. We have known what is right and wrong for centuries. It doesn’t mean that is how we have always conducted ourselves, thus the need for laws to govern and religions to forgive. Apparently the art world will act to absolve as well.

Art historians and gallery owners conspire to keep ‘genius’ elevated over consequence, to detriment of girls’ and women’s lives. Defended by those who stand to make money and careers off of ‘great artists’. We have constructed the concept of genius and given it supremacy. But if we stop propping it up, then can it eventually go away?

Being in a room of Schiele works can be very triggering. Kallir describes how his practice involved intimate and predatory methods to achieve his signature style. Yet she claims these women had ‘sexual agency’. How is that possible when you are told to lie on a mattress as a man looms over you, drawing your vagina? We have no idea what actually happened; as Kallir says, there are no living witnesses. However, by her own words, we know if he did assault them, it was all part of the gig:

By all appearances, Schiele’s sexual escapades were fully in keeping with the norm for a bourgeois young man. Because males were not considered suitable marriage partners until they had established themselves professionally, they were expected to spend their early 20s consorting with prostitutes and lower-class lovers. Most of these prostitutes were minors; the age of consent in fin-de-siècle Austria was 14. And since any woman who earned her living in the buff was considered to be morally compromised, the line between prostitution and modelling was slender.

This is the very definition of ‘boys will be boys’ and perpetuates the dearly held idea that men are not responsible for their actions because they are socially sanctioned. 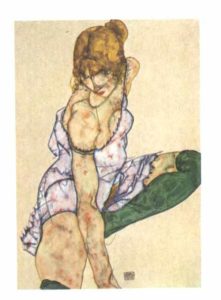 We have hundreds of accusers/witnesses to rapes and assaults by contemporary artists, and the court of public opinion still doubts that our beloved geniuses are guilty. Why don’t we believe women? Is it also important to know that he allegedly had an incestuous relationship with his younger sister? I think so. He was undoubtedly a pedophile/predator and that age of consent matters very little in terms of contemporary or historic social morality. The age of consent is STILL 12 in much of Mexico, 13 in the VATICAN CITY and 16 in most of the rest of the world. What does that say about us today? And just because someone was not convicted, doesn’t mean they aren’t guilty. Although Schiele did serve a few weeks for ‘public immorality’ relating to his behavior with minor girls.

Clearly Kallir and many others in the art world value his life (because he is a white male artist) infinitely more than the girls he used for his art. This belief is widespread and it has not changed much over time either. We still value one life over another—boys over girls, rich over poor. We still think that models do not deserve body autonomy. Kallir is the author of the Egon Schiele catalogue raisonné and the co-director of Galerie St. Etienne in New York. If you stand to make money off of an artist’s work then of course you will defend him. Queue all the contemporary #MeToo apologists.

Let’s stop making excuses for rapists, child molesters and violent predators. Tell the truth in publications and wall text. Don’t hide artists’ crimes behind a label of ‘greatness’. Give audiences the information to make their own decisions. #MeToo doesn’t shut down dialogue, it opens up the a whole new possibility in the art world where we can treat girls and women with respect and–hopefully–one day, equality.