United Kingdom Pledge for Girls’ Education in the Commonwealth 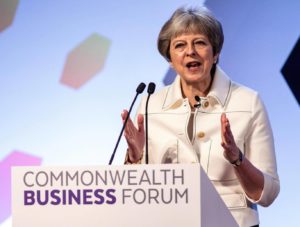 UK Prime Minister Theresa May has announced that the government will assist one million girls in the Commonwealth to attend school for longer. They have pledged £212 million, with the goal of enabling children to attend school for 12 years. Leaders from the 53-nation bloc met in London two weeks ago for a Commonwealth heads of government meeting, which is held every two years. During the meeting, May urged Commonwealth leaders to work to keep more children in school, halving the dropout rate by 2023.

She said: “Across the Commonwealth, tens of millions of young people – usually but not always girls – are denied the education that would allow them to get on in life. All our members have pledged to “ensure inclusive and equitable quality education and promote lifelong learning opportunities for all. All too often young people receive only the most basic education before being forced out of school through discrimination, poverty or simply the expectations of society.”

According to the Independent, Prime Minister May highlighted the importance of women in the workforce during her speech and cited estimates that the global GDP could rise as much as £19.5 trillion/$26.5 trillion if women had the same role as men in the labor market.

During her speech, May also talked about the importance of ending malaria, which is considered one of the world’s most deadliest diseases. In 2016, the UK pledged half a billion pounds a year over five years to fight malaria.

Girls’ education is routinely not prioritized across the world, and not just in the Commonwealth. And as I wrote about earlier in the week, education opens doors for so many people. If the marginalized don’t have access to or are held back in their educational pursuits and that limits their further opportunities, then how can they be properly represented in government and politics, and all parts of life? I applaud the UK for investing in girls’ education, like so many countries around the world are increasingly doing, and I hope that more countries will follow suit and take girls seriously. The future is female.